Arsenal face a stern test if they are to make it two wins from two on Saturday with a trip to Goodison Park.

The Gunners left it late to beat Crystal Palace last weekend thanks to Aaron Ramsey’s winner in stoppage time.

Everton themselves let slip of a lead late on as they were held 2-2 at newly-promoted Leicester City. Roberto Martínez’s side were certainly be the fresher of the two as the visitors were playing in Turkey on Tuesday night.

Beşiktaş held Arsenal to a 0-0 draw in Istanbul meaning Arsène Wenger will almost-certainly name his strongest possible squad for the second leg on Wednesday. Aaron Ramsey is suspended so expect the Welsh international be given the full 90 minutes here.

Aside from a busy fixture list to start the season, Arsenal also have a few injuries already. They are limited with options in defence following the sale of Thomas Vermaelen too.

Ross Barkley, Arouna Koné and Bryan Oviedo are all out injured. The latter two have been out since last season whilst talented youngster Barkley is facing up to six weeks on the sideline following a leg injury picked up in trainnig.

Mikel Arteta was the latest injury in the Arsenal squad. The 32-year old picked up an ankle injury on Tuesday that will keep him out of action for the remainder of the month.

Arsène Wenger has confirmed that he told his German World Cup winning trio to target this match as their possible return but that he will not play all three of them on Saturday.

Theo Walcott is due back in full training at the end of the month. Kieran Gibbs, Serge Gnabry, Ryo Miyaichi and David Ospina are all ruled out too.

Yaya Sanogo is a doubt with an injury picked up last weekend that kept him out of the European tie midweek. If Lukas Podolski isn’t match fit, Wenger has only Olivier Giroud and Alexis Sánchez as options up front. 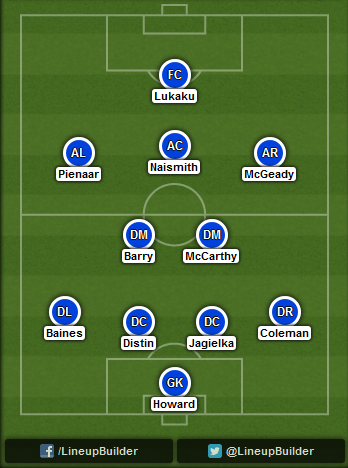 Séamus Coleman in for John Stones at right-back is the only change we’ve made from the Everton side that started on the opening day. Aidan McGeady and Steven Naismith both got on the scoresheet at Leicester. Romelu Lukaku was kept quiet whilst the Everton defence did not look so solid. 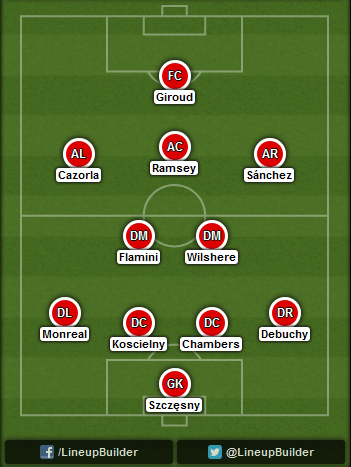 This looks like the best eleven available to Arsène Wenger. He may start one of his German trio but it’s hard to predict who. Giving Mesut Özil some game time for the first time since the World Cup final would be handy if he’s going to start on Wednesday. Lukas Podolski hasn’t looked good as a sole striker before which could force Wenger to play Olivier Giroud up top for 90 minutes. The French striker looked hopeless in Turkey midweek.

Alexis Sánchez vs Leighton Baines
Arsenal’s big money signing has shown flashes of brilliance in his opening three matches but yet to produce any final product. Alexis Sánchez has won several corners but is yet to create a goal or score one in open play. Leighton Baines looked poor against top level opposition at the World Cup in the summer, so the Chilean forward should fancy his chances. Opportunities to cross the ball into the box should arise if/when Baines doesn’t close him down. The Everton full-back also likes to skate forward himself so there’s the potential for Sánchez to find some space on the break.

Aaron Ramsey vs Gareth Barry
Aaron Ramsey has scored in both the FA Community Shield and Premier League so far this season, continuing his goalscoring form that he showed at the start of last season. The experienced Gareth Barry may be tasked with keeping the Arsenal attacking midfielder quiet. This will include closely tracking Ramsey’s well-timed runs in the box as well as the occasional pot shot at goal. Arsenal’s number 16 has proven to be a match winner over the past 12 months.

Romelu Lukaku vs Laurent Koscielny
The Everton striker may have been quiet last weekend but there won’t be too many weekends when Romelu Lukaku isn’t threatening the opposition goal. Brede Hangeland’s goal from a corner is the only time Arsenal have conceded in their three games so far this season but Everton have a few good attacking options. Lukaku is quick, has a good shot on him and is powerful in the air. Laurent Koscielny and Calum Chambers have been warned.

Prediction: Everton 1-1 Arsenal
Arsenal are playing their fourth competitive game in two weeks whilst Everton will be the fresher playing in only their second. A number of absentees in the Arsenal squad also means they have not been able to rotate as much as I’m sure Arsène Wenger would have liked. Everton weren’t so convincing last weekend so we’re going to sit on the fence with this one and predict a draw.