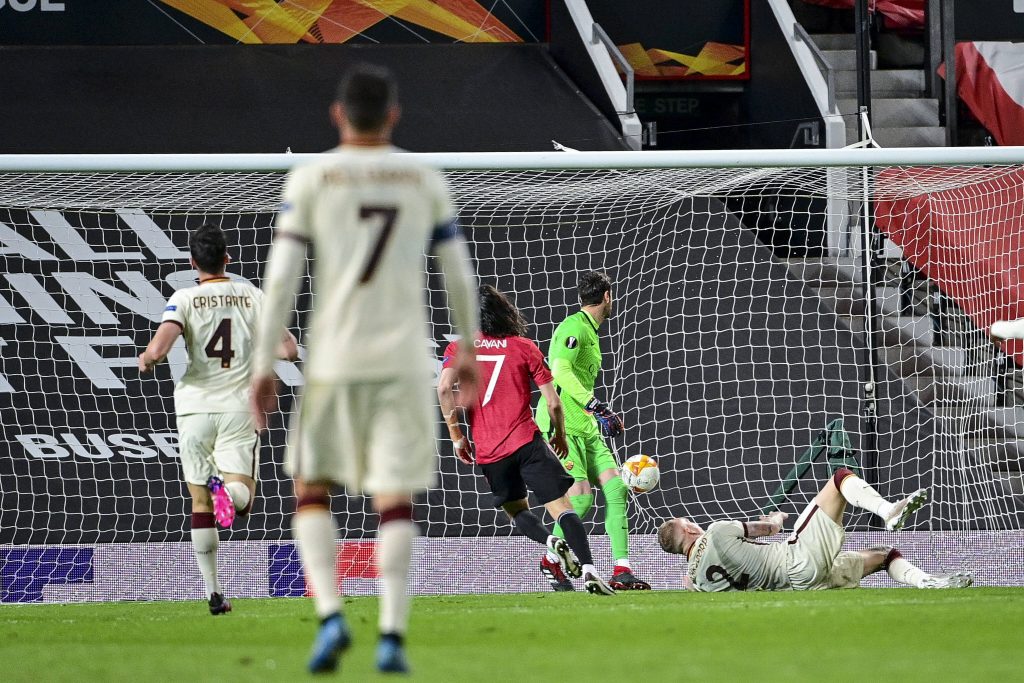 The Europa League is approaching its closing stages, with just three games left to be played, and you can watch all three Europa League matches live online.

On Thursday, the first leg of the semi-finals got underway, with Manchester United welcoming Roma to Old Trafford and Villarreal hosting Arsenal.

The two English sides had opposite fortunes. Man Utd almost certainly sealed their place in the final with an emphatic second-half performance, while Arsenal returned to north London behind in the tie.

Two years ago, we had an all-English final and an English Europa League winner. This season, another such final could be on the cards. It should be worth keeping an eye on Thursday’s clashes.

The first half went wonderfully for Roma. Having conceded early, La Lupa responded perfectly, scoring twice before the break through Lorenzo Pellegrini and Edin Dzeko.

The second half, however, was not so joyous. Edinson Cavani netted a brace, and Bruno Fernandes, Paul Pogba, and Mason Greenwood all got themselves on the scoresheet. The game ended 6-2 to the home side.

So, what do Roma need to turn this around? A miracle, most likely.

Thankfully, they have a little bit of experience when it comes to miracles.

Possibly their most memorable fixture in the modern era came in April 2018 against Barcelona. Having trailed 4-1 from the home leg, Roma pulled off an unbelievable comeback, winning the second leg 3-0 thanks to goals by Dzeko, Daniele De Rossi and Kostas Manolas.

This time around, they will have to outdo that night without the fans. Unlikely? Yes. Impossible? Almost.

Unlike the other game, Arsenal vs Villarreal is still very much in the balance. The Yellow Submarine took the first leg, winning 2-1 thanks to goals by Manu Trigueros and Raul Albiol.

Unai Emery returns to the Emirates Stadium knowing that a draw will see his side progress to the final. However, the Spaniard will also be aware that a 1-0 defeat will knock him out.

Stopping Arsenal from scoring will be the key for Emery. His side have kept 17 clean sheets in all competitions this campaign, so may feel confident in this task.

Meanwhile, Mikel Arteta’s men have scored just 46 league goals this season, which is the second-fewest in the Premier League’s top half. They have also drawn a blank in 12 league games, including eight at home.

However, the Gunners have had a lot of joy in front of goal in Europe, netting 33 goals in just 13 outings. Nicolas Pepe, in particular, has shone, netting six goals and four assists.

For Villarreal to reach the final, they will need to be as solid as possible at the back, and maybe it would be wise for Emery to take a defensive approach.

The likes of Gerard Moreno, Paco Alcacer and Samuel Chukwueze should provide enough threat on the counter.

Whatever happens, it should be an exciting game.