Fantasy Football is back for another season, and while the Premier League incarnations are sure to be, once more, hugely successful in drawing players in, there will be a growing number of fans who are tempted to broaden their horizons, and try a more expansive brand of the fantasy genre. The popularity of European Fantasy Football is increasing every year, and with sites such as Eurofantasyleague.com offering managers the chance of creating 14-man squads (with a £100m budget) with players from across the five top European leagues, you can understand why interest is peaking.

I, for one, will be partaking in this year’s Eurofantasyleague.com campaign, and having picked my side, am feeling very confident of success as the season’s start inches nearer. 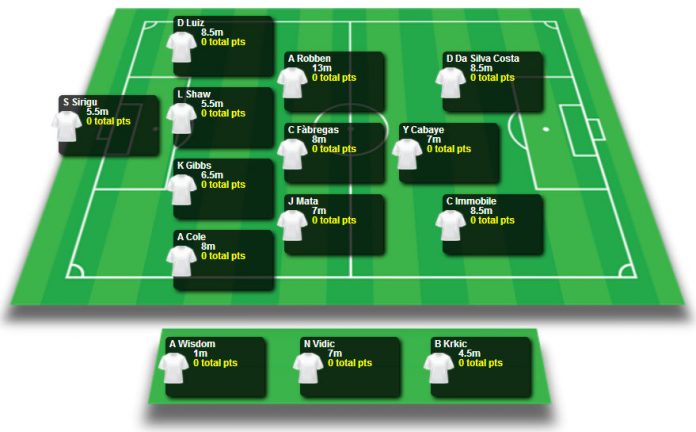 I’ve selected PSG’s Salvatore Sirigu as my European Fantasy Football number one, not only as his price is significantly less that that of, say, Manuel Neuer (£13.5), Gianluigi Buffon (£10.5), and Thibaut Courtois (£13m), but because PSG have created quite the monopoly over the French Ligue 1, and anything but yet another title win seems unlikely, even at this juncture!

A back four of Kieran Gibbs, Luke Shaw, Ashley Cole and David Luiz fills me with confidence. Gibbs and Arsenal were, despite slipping up to the big teams last year, excellent at the back throughout last season, while Manchester United under Louis van Gaal will surely see £30m new signing Shaw shine. Ashley Cole is still, in my book, one of the best left backs around, while the enigma that is David Luiz remains a real goal-threat. Former United man Nemanja Vidic stands ready to jump in from the bench, while cheap-as-chips Andre Wisdom could be a great bit of backup if he gets games on loan at West Brom.

My midfield, well, my midfield looks just delicious. Arjen Robben is in the most devastating form of his life, while Juan Mata, with all of his creativity, at £7m is a steal. New Chelsea man Cesc Fabregas could be the key to the Blues winning the title this year, while former Newcastle pivot Yohan Cabaye will surely be among the assists in the French league.

Up top, I’ve plumped for Diego Costa and Ciro Immobile. Many of you will be writing me off due to the fact I’ve neither Leo Messi or Cristiano Ronaldo, but I defy you to fit them in your team! At £23.5m each, the likelihood of the pair both being in any serious fantasy player’s team is small!

European Fantasy Football is a game for the brave, for the switched on, for those with the footballing knowledge. It’s a harder prospect to try and fit so many world class players into a squad of just 14, but it certainly is satisfying! With 20 free transfers for the season, I’m by no means bound by my original selections, and I can attempt to squeeze in another big gun if it starts to wobble.

Head over to Eurofantasyleague.com and see if you can best my team!