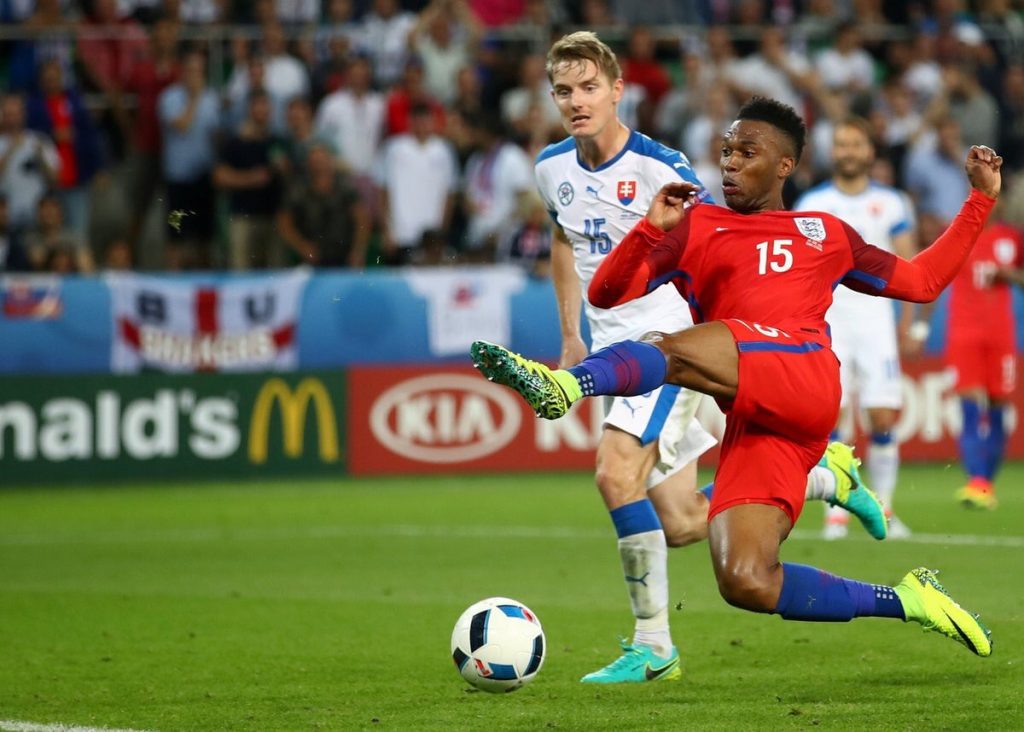 England were held to a frustrating 0-0 draw against Slovakia on Monday night in Saint Etienne but the Three Lions are still through to the last 16 after finishing second in Group B.

Roy Hodgson made six changes to the starting line-up that started in 2-1 win over Wales. Kyle Walker and Danny Rose were rested and the duo were replaced by Nathaniel Clyne and Ryan Bertrand.

In the midfield, Jordan Henderson and Jack Wilshere were included in the starting line-up, while Daniel Sturridge and Jamie Vardy were expected to feature after both of them scored against Wales.

England dominated loads of possession (as in the case with the other games) but they failed to create enough clear-cut chances. In fact, they were actually worse after Wayne Rooney and Dele Alli came on.

Roy Hodgson’s side have finished the group stages in an unconvincing manner and they need to be more incicive in the knockout rounds.

GK Joe Hart, 5 – The Manchester City goalkeeper enjoyed a leiseurly afternoon as he was hardly tested by the Slovakian forwards. He wasn’t forced to make enough saves, and whatever he did, were all routine stuff.

DF Chris Smalling, 5 – Apart from one moment of casual approach, where he attempted a chest back to Hart, which was pointless and was very lucky to get away with it, Smalling had very little to do in terms of defending.

DF Gary Cahill, 5 – The Chelsea defender was solid at the back, but again, apart from few routine clearances, he didn’t have anything else to do.

DF Nathaniel Clyne, 7 – If Kyle Walker was England’s best player in the last two games, his deputy performed exceedingly well against Slovakia. Always a threat going forward, he kept Vladimir Weiss under control throughout the match.

DF Ryan Bertrand, 5 – He was fine overall. Not too impressive unlike Clyne, but could have done more attacking wise, that is, putting in some good crosses from the left.

MF Jack Wilshere, 4 – The Arsenal midfielder started well, but after the opening 10-15 minutes, he simply faded away. He misplaced too many passes, and kept losing possessions at good areas. The intent was there from him, but he looked jaded and was missing the cutting edge. Clearly lacking in fitness, question needs to be asked why was he selected at the first place?

MF Jordan Henderson, 7 – While some Manchester United fans find his performance ‘atrocious’, but in truth, he was one of the best performers on pitch. Intelligent with his passing, very fluid with his movement, he created couple of good chances for Vardy and Alli in the match, but at the same time, he was equally wasteful with his set-pieces.

MF Eric Dier, 8 – He is arguably England’s best player on the night. Sitting deep in the midfield, his main task was to shift the ball to attacking players, and he did that efficiently.

FW Adam Lallana, 7 – Lallana is a solid player. He is good with his touches, works hard and helps the defender out, joins the attack and gets into good scoring positions as well. But, he always gives the impression that he can do more.

FW Jamie Vardy, 4 – One thing Roy must take note – Vardy’s pace is always a threat in an open game, but when the other team is defending deep, he struggles a lot. He showed few decent runs in the first half, but largely anonymous after the break. He is a reported £20m target for Arsenal, but Arsene Wenger, who was in the stands watching the game, may not be too impressed with his performance on Monday night.

FW Daniel Sturridge, 7 – He was lively throughout the game and tried to create chances for others, but his involvement is limited being stationed on the right wing. He should play as a no 9 striker and not as a supporting role.

Wayne Rooney, 5 – Henderson dropped deep to allow Rooney move further up the pitch. He offered very little going forward. At times he tried to run through the Slovak defence with his pace and strength, but then lost the ball carelessly.

Delle Alli, 5 – The Spurs midfilder got a golden opportunity to make an instant impact and he nearly gave England the lead, but his effort was saved by Martin Skrtel on the goal line.

Harry Kane, 5 – Kane has been a huge dissapointment for England in Euro 2016. It seems like he is shorn off confidence at the moment as if he has little idea of what to do next with the ball.