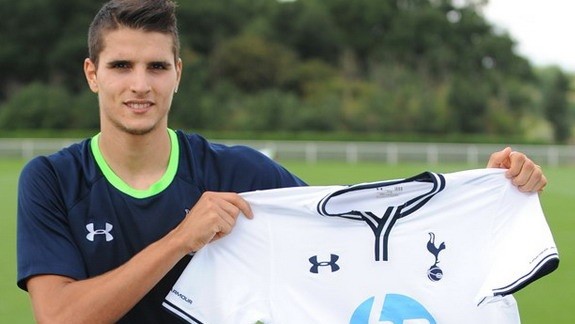 River Plate’s relegation from the Primera División in 2011, the first time the most successful club in Argentina had ever been relegated, worsened the already low bargaining point which South American sides have in comparison to their European counterparts. This plight forced them into a position where sales were almost unavoidable and, as a result, their most talented youngster at the time – the then 19 year old Erik Lamela – had to be sold.

Interest was large from a number of top clubs, given the growing reputation of the player at the time, but AS Roma ultimately won the race for his signature for a fee of around £15 million. Previously deployed as a playmaker behind the striker whilst in Argentina, a large responsibility for such a young player, Lamela was moved out wide to the right wing by Luís Enrique – his first coach at AS Roma. He suffered a little under the system Enrique used, one of patient build-up which restricted the use of his lightning pace and truly exceptional dribbling, though he managed a fairly respectable 6 goals in his first season in Europe.

A change of manager for 2012/13, with Zdeněk Zeman replacing Enrique when the previous season concluded with Roma failing to achieve European qualification, saw a new vein of form for the Argentine however. A flowing and attacking style of football (which continued after Zeman’s dismissal in February) gave Lamela the freedom he needed to really express himself, resulting in a string of phenomenal performances –he scored 15 goals in 33 Serie A matches last year, a fine return for a winger.

A lack of stability at Roma, both financially and managerially, meant that Lamela was somewhat available this summer – much to the dismay of their fans. With Franco Baldini (Spurs’ director of football) having recently joined from Roma, he was able to use his contacts at his former club to negotiate a big money deal in the region of £30 million for the highly rated Argentine. Previously touted by the legendary Francesco Totti as his ‘heir’ at the Italian side, an enormous honour, ‘Coco’ has now joined a newly reformed and highly ambitious Tottenham side in the wake of Gareth Bale’s departure to Real Madrid. As the North London club’s record signing, Lamela will be expected to ease the loss of the influential Welshman.

As mentioned previously, his main assets are his pace and close control at full speed. He’s not as physically dominant as someone like Bale (he has a rather slender build), but Lamela is just as capable at going past players with his acceleration and trickery. He has developed a real eye for goal in recent months as well as having an excellent creative instinct – something picked up from his days as a number 10 in Argentina. ‘Coco’ is expected to be positioned on the right wing where he was so successful for Roma, although he is capable of playing on the opposite side as well as in the hole. Being on the right flank means he can cut inside onto his beauty of a left foot more often (as Bale did in his final few months at White Hart Lane), but he has versatility to his game which prevents him from being too repetitive and predictable.

Whilst a lot of players have been brought in by Tottenham with the Gareth Bale money this summer, none are as exciting as this magician – currently 21, Erik Lamela is better than Bale was at the same age. Under the management and style of André Villas-Boas, one of the best young managers in the game, the Argentine winger is in a fine position to develop into one of the top few players in the world. Spurs have a true top class talent in their hands.