Tottenham Hotspur stay 2nd in the Barclays Premier League table, after managing a 2-2 draw against Arsenal in a pulsating thriller at White Hart Lane on Saturday.

Leicester City cemented their position at the top of the table after winning 1-0 away to Watford.

We bring you all the results and the updated Premier League table, as we cover all the matches on week 29. 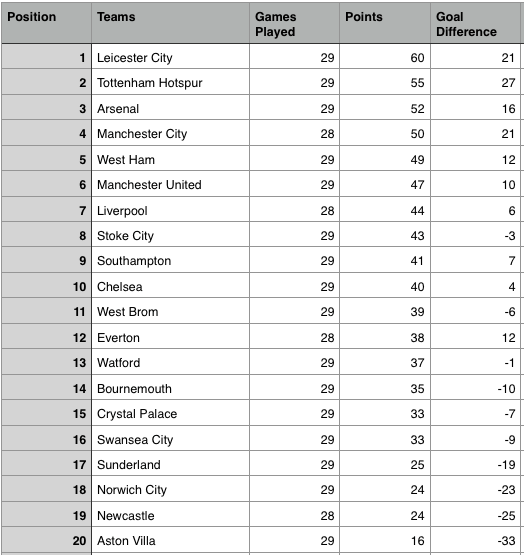 Tottenham vs Arsenal: In the end, it seemed a fair result. Both the managers will be happy with the commitment shown by the players. Spurs may feel that they should have won the game against a 10-man Arsenal, especially after taking the lead.

More than the result, Wenger will be happy to see Alexis Sanchez getting his name on the scoresheet. With nine games left to play, Wenger will be counting on the Chilean star to return to his old best. Read the match report here.

Great fightback from West Ham: Had it been any other season, where Leicester City’s fairy tale journey hasn’t got much hype, surely West Ham would have grabbed big headlines of the back pages.

From 2-0 down, the fight back began. And with quarter of game left, the visitors produced a superb comeback to snatch three points, with Dimitri Payet, once again shinning for the Hammers.

Aguero dazzle for City: The Argentine scored twice, as City thrashed bottom placed Aston Villa 4-0. Aguero has now scored 10 goals in his last 10. And his fitness is key to City.

“Sergio makes a difference — that’s why maybe three weeks ago, when we lost against Leicester and Tottenham, I said it was the merit of the squad to be fighting for the title with so many important players like [Vincent] Kompany, [David] Silva and Kun [Aguero] injured.

“Of course when you have your best players it is better for the team. But when you don’t have, you need a squad,” said Pellegrini after the match.

The Reds bounced back from a goal behind and a man down to beat bogey team Crystal Palace 2-1 at Selhurst Park, where Christian Benteke scored the winner in the dying minutes of the match.

Leicester – The dream run continues: It is no longer a question of ‘can they do it?’. It has reached a stage where neutrals probably want them do win it. For the sake of the league.

Rihad Mahrez was the match-winner at Vicarage Road as the Foxes lead the Premier League with five points ahead of their nearest rivals. Mahrez scored his 11th away league goal of the season, and he is a strong contender for the Premier League player of the year this season.