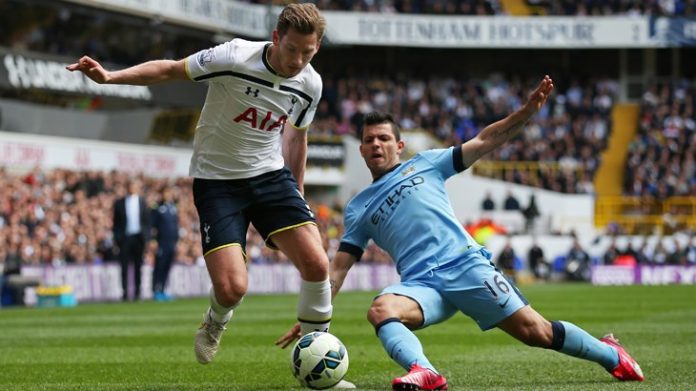 Manchester United moved into second place in the EPL table 2015 after their impressive 3-1 victory over Southampton on Match day 6. Pundits have been proved wrong with their Premier League predictions, as Liverpool, Newcastle, and Manchester City all failed to win their respective matches, many thought they would win easily.

We have some cracking EPL fixtures coming up for this week, the pick of the game being Manchester City’s visit to White Hart Lane.

Chelsea will be looking to continue their resurgence when they travel to St James’ Park to face a struggling Newcastle United side.

Ahead of Week 7, let us take a look at the Latest EPL Table 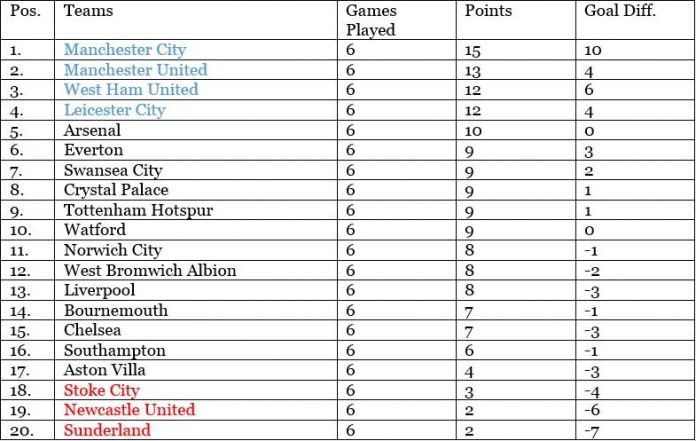 * Manchester City have won their last Five away games in the Premier League.

* Arsenal are undefeated in last 10 games vs Leicester

* Southampton have managed only Two wins in last 9 games

* Watford have kept Five clean sheets in all competitions so far

Despite Tottenham’s disappointing 2-1 defeat to North London rivals, Mauricio Pochettino can draw plenty of positives from that game. A mouth watering fixture like this needs no extra motivation, and Spurs will be hoping to bounce back strongly with a victory on Saturday lunch time, though easier said than done.

Manchester City: Have conceded 4 goals in their last 2 competitive fixtures having conceded 2 in their previous 9

City’s perfect start to the season was halted last weekend with their 2-1 defeat to West Ham. Pellegrini’s side shook off the disappointment with a 4-1 win over Sunderland in midweek. The Citizens will be hoping to secure maximum points at White Hart Lane and ensure the defeat to West Ham was just a mere ‘bad day in the office’.

Just when things were looking to get back on tracks for Chelsea, a new problem hangs like an Albatross round Mourinho’s neck. Diego Costa will start his first of three match suspension away to Newcastle, which means Mourinho will be forced to reshuffle his attacking line up. 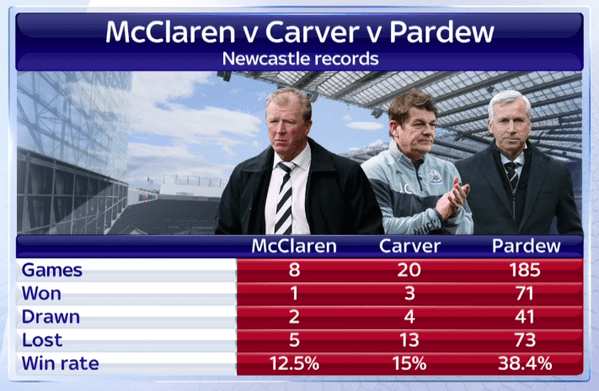 The Magpies are without a win so far this season, and Steve McClaren is getting loads of stick from all corners for his side’s lacklustre performances. For the sake of record, St James’ Park hasn’t been a happy hunting ground for Mourinho, with the Blues suffering defeats in each of their last three visits on Tyneside.

Leicester are the only team that are yet to lose in the Premier League so far. That might change on Saturday, with Arsenal visiting King Power Stadium, looking to end their fairy tale journey.

The Gunners suffered yet another defeat at the hands of Chelsea last week, but they bounced back strongly with a 2-1 win over their North London rivals Spurs in the midweek.

Leicester have played some eye-catchy football this season, and have won their five of last six home games in the league. It should be a feisty affair.

Over the years Manchester United have enjoyed vaunting dominance against some of the Premier League clubs like Tottenham, Newcastle and Sunderland. New signing Anthony Martial has taken the league by storm by scoring four goals in his four appearances. United camp will be relieved to see Wayne Rooney scoring in the midweek as well. The England skipper was struggling with his club form, but the goal against Ipswich will surely give him enough confidence.

The Black Cats have been miserable this season so far. They have conceded 13 goals thus far and are yet to win a single game. Does anyone really expect them to cause an upset at Old Trafford?

Brendan Rodgers is under tremendous pressure at the moment. The results have dried out, the team lacking in cohesion, and one can sense a change is required at Anfield. Although Liverpool owners have shown full confidence in Rodgers, but there is a growing anticipation that his job is under a huge threat. Under such intense pressure, Liverpool host Aston Villa at Anfield, where another poor result, be it a draw or defeat, would lead to a massive fan backlash and might cost the job of the Reds manager.

Villa have done quite well during their recent visits to Anfield, having remained unbeaten in their last four trips.

Watford, like Leicester, are enjoying life back in the Premier League. They have lost once in last six matches and have played some lovely, eye-catching football.

Crystal Palace are usually good on their travels, but Alan Pardew will be worried with his side’s consistency.

They were presented with a tough set of fixtures over the past three weeks, having faced the likes of Chelsea, Man City and Spurs in their last three games. While they edged Chelsea 2-1 at the Bridge, Palace suffered narrow 1-0 defeats against City & Tottenham. However, the Eagles have bounced back strongly in the midweek beating Charlton Athletic 4-1 in the League Cup 3rd round.