Another eventful week in the Premier League came to an end yesterday.

With the English clubs looking forward to the upcoming international break, we look at some of the highlights from this week’s action.

From the North London Derby to Jurgen Klopp’s first defeat as Liverpool manager – there were plenty of talking points once again from the most popular league in world football.

Liverpool are painfully average and Jurgen Klopp is no miracle worker

Liverpool crashed to a 2-1 defeat at home to Crystal Palace yesterday. The Reds once again failed to turn up against their bogey side as Alan Pardew continued his impressive record against the Merseyside giants.

Despite their improvement under new manager Jurgen Klopp who guided them to four consecutive wins in all competitions, the Reds failed to carry the momentum into the Palace game and were punished accordingly.

Although Brendan Rodgers deserved the sack, it cannot be ignored that the Liverpool squad is painfully average. Unaware of the basics of defending, crucial errors are a part and parcel of Liverpool’s football nowadays.

Klopp will need time and a few transfer windows to turn it around at Anfield.

Tottenham went into the North London derby with plenty of confidence after their run of 10 games unbeaten in the Premier League.

It was the third game in the space of six days for Mauricio Pochettino’s side and their desire and dedication was splendid.

The away side were relentless and could have come away with more than just a point from Emirates yesterday.

Pochettino has morphed Spurs into a relentless pressing machine and the midfield duo of Dier and Dembele is one of the best in the league on current form.

Also last season’s star Harry Kane is back amongst the goals and the England international looks like he is close to his former devastating self now.

With the likes of Bentaleb and Son coming back into this side, Spurs are definitely the frontrunners for the fourth spot.

Jamie Vardy and Leicester City are here to stay

Vardy became the first English striker to score in 9 consecutive Premier League games when he netted against Watford.

The Leicester City forward has been unplayable this season and by his own admission, everything he touches turns to goals.

The Foxes are flying high and are just one point off the top of the table.

Granted they won’t be there for long and perhaps fail to qualify for the Europa League as well, but Ranieri’s men can certainly cement their place in the Premier League top half.

Sacking Garry Monk would be ridiculous

Van Gaal is unspectacular, but solid

Manchester United eased to a 2-0 win against West Brom on Saturday.

Despite them being just two points off the top, Manchester United fans are unhappy with what they have seen this season.

The Dutchman has gone on and on about his philosophy of how to play football and although it’s not quite the visual delight we expected it to be, it is quite efficient.

After guiding them back into the Champions League last season, Van Gaal’s side are now firmly in the title race.

Manchester United are a well organised outfit capable of grinding out results despite their struggles in front of the goal.

Perhaps Van Gaal can sort out their faltering attack with a couple of January signings. The Dutchman did mention the need for a pacey winger in his post match presser after the WBA game.

It’s only a matter of time for Mourinho

Chelsea were much better against Stoke than they have usually been this season. Despite their best efforts, the Premier League champions crashed to yet another defeat.

It seems Chelsea’s bad luck has not run its course yet. From missing open goals to hitting the post almost everything went wrong for them in the game.

The Blues need a miraculous recovery to get back into the Champions League places now and it is very unlikely.

Jose Mourinho is safe for now, but it is only a matter of time. He is a world class manager and perhaps the best in the world but turning this around seems beyond him at this moment.

Aston Villa can build on the Manchester City result

Remi Garde made a decent start to life as Aston Villa manager. The Villans have been abysmal this season but looked like a more galvanised unit under their new manager.

Villa have been disastrous at the back this season and taking on the Premier league goal machine, few would have expected them to keep a clean sheet.

Garde’s side were impressive and well organised throughout the game. Although City dominated the game from start to finish, Villa held on for an important point.

There were enough positives to build on for the former Lyon manager who has been tasked with saving Villa from relegation.

Here is how the Premier League table looks after game-week 12. 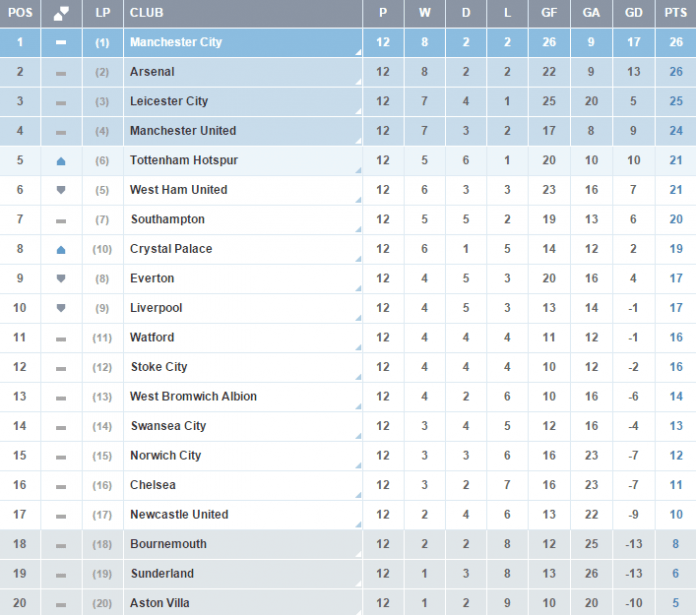