While Real Madrid and Barcelona enjoy nearly a billion Euros of revenue between them, the 2013 Deloitte Football Money League features seven clubs from the Premier League – the most from any country in Europe.

Before we look at these seven clubs, there were others from England that were immediately below the top 20. Everton, Aston Villa, Fulham and Sunderland all generated revenues just under a hundred million Euros.

Manchester United retain third place in the Football Money League despite not winning the Premiership last season. United also suffered early exits from the Champions League and the FA Cup. 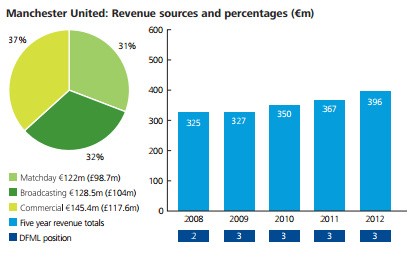 Chelsea also managed to retain their fifth position with a 14% increase in their total revenue as compared to last season. It was a season to remember as Chelsea overcame the mighty Barcelona and the efficient Bayern Munich to become the first London club to win the coveted Champions League trophy. 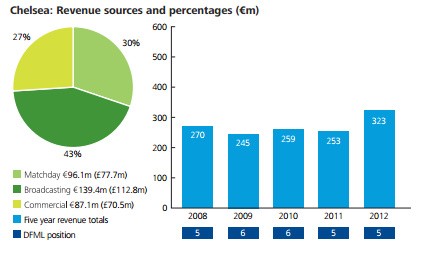 Arsenal remained at sixth in the Deloitte’s Money League. In their 125th anniversary season, a rally late in the season helped the club finish third in the league. Arsenal fell short of a remarkable come-back against AC Milan as they exited the Champions League last season. 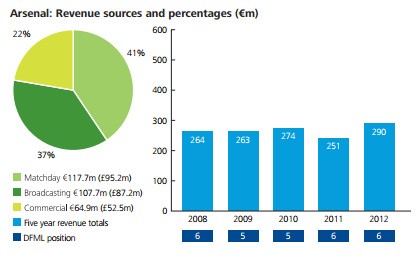 A few seasons ago, Manchester City made a nine-place jump to reach the 11th position in the Football Money League. They pulled off another stunt with a five-place jump to enter the top ten. The factors contributing to this jump are the Premier League title, the inaugural participation in the Champions League and the sponsorship deal with Etihad Airways. 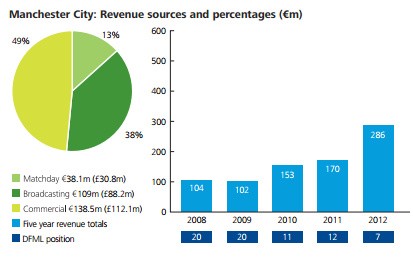 Despite an ordinary season, Liverpool remain at the ninth position in the Money League. The Merseyside club finished eighth in the Premier League. Although they managed to reach the final of the FA Cup and win the League Cup, it was Liverpool’s third successive season in which they failed to qualify for the Champions League. 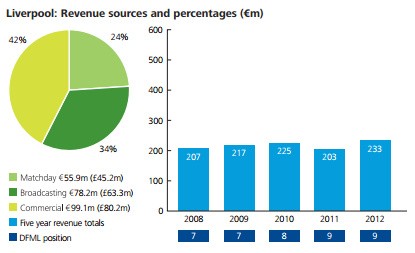 Tottenham dropped two places to 13th in the Money League with a 12% decrease in the total revenue in 2011/12. Spurs had a frustrating season, they reached the semifinals of the FA Cup and finished fourth in the Premier League. They missed out on the Champions League due to Chelsea’s win in the final. 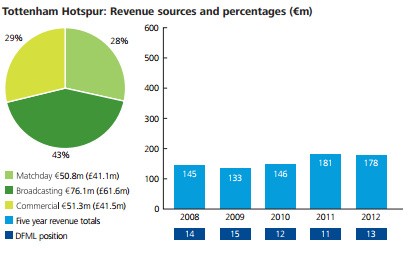 After an absence of three years, Newcastle re-enter the Football Money League by replacing Valencia in the 20th position. They had been present in all the twelve editions of the Deloitte Football Money League. Their highest position was fifth in 1997/98. In 2011/12, they recorded an increase of 5% in the total revenue. 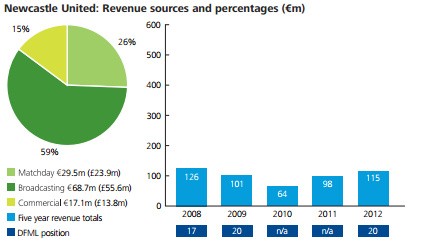