And lo, yesterday came the inevitable news that every right-minded man, woman and child had been dreading ever since that glorious day in Budapest on the 28th April 1999.

After 11 long years of distinguished service at the very top of his chosen profession, Emile William Ivanhoe Heskey finally made the decision to call time on his illustrious international career.

Since making his debut against Hungary over a decade ago, Heskey has amassed a richly-deserved 62 caps and scored the princely sum of seven international goals – goals which helped England to impressive victories over such footballing luminaries as Malta and Kazakhstan no less.

Heskey, who lest we forget is a veteran of three World Cups and two European Championships, released the following statement yesterday to accompany his devastating announcement;

“I have enjoyed every moment of my England career and worn the shirt with pride every time I have been fortunate enough to have been selected.

I would like to thank every manager I have played under, everyone at the Football Association and the fans for all their support over the years. I wish the management team and the playing squad all the best for the future.”

After being put under immense public pressure, The FA are now seriously considering the introduction of a minute’s silence before all future England games to mark the 32-year-old legend’s passing. 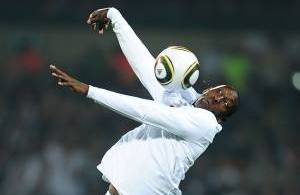 As you can probably tell, I don’t personally subscribe to the ‘enlightened’ theory that Heskey unselfishly sacrifices himself to allow his teammates to play around him, and tend to lean on the side of the argument that suggests he is just an immobile lump with no striking prowess what-so-ever.

There was a time, i.e. when he first burst onto the domestic scene with Leicester City fifteen years ago, when Heskey looked like he had real potential. He was quick, powerful and a very real goal-threat (if not a little on the ‘raw’ side) but it’s pretty much been downhill since then as most right-minded Liverpool, Birmingham, Wigan and Aston Villa fans will all testify to.

Yet somehow the Heskalump continued to retain his place in the national side, despite contributing the sum total of diddly-squat (save a few fortunate deflections into the path of oncoming colleagues) during his overly-lengthy international tenure.

His retirement will hopefully free up a space in the England roster for an up-and-comer to prove their mettle, but with the current dearth of options available to the management (Gabriel Agbonlahor?) that doesn’t seem to be quite the enticing prospect it should be.

Anyway, so long Emile, thanks for all the…erm…well…so long.