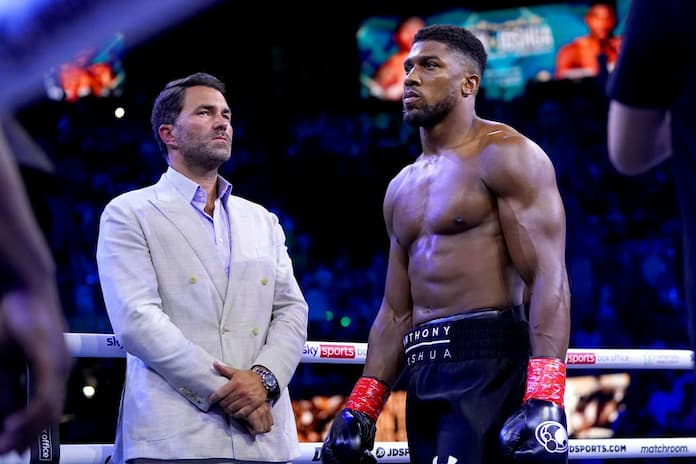 It look like the end has come for the potential fight between Anthony Joshua and Tyson Fury. Although it looked like negotiations were progressing nicely, it seems they have stagnated and come to a halt. According to AJ’s promoter, Eddie Hearn, the fight is very unlikely to happen next.

Here are the latest updates and rumours surrounding the Fury vs Joshua fight, whether it could still happen or if the fight is completely off the cards.

Fury vs Joshua Fight All But Off According To Eddie Hearn

With boxing fans getting their hopes up that the Tyson Fury vs Anthony Joshua fight was closer than ever, it now seems the fight is a goner. Despite the negotiations and constant back and forth between Team Joshua and Team Fury, the fight looks like it has no chance of happening.

Just like when the Fury vs Joshua fight first entered contract negotiations in 2021, the fight looks to have fallen through at the final hurdle. Supposedly a purse split of 60/40 in favor of Fury, a venue, date and broadcast deal had been agreed. However, this doesn’t seem to be the case now after negotiations have halted once and for all.

Eddie Hearn, who has been Joshua’s promoter since he turned professional back in 2013 after winning the Olympic Gold Medal at London 2012, isn’t optimistic that the fight will get signed anymore.

“As far as we’re concerned the fight’s off. We’re happy to continue the discussions.

“In our mind, he’s [Fury] not fighting Anthony Joshua. We’re more than happy to continue those conversations but what we’ve been told is the deadline is passed and so have the entire country.”

Hearn has been sceptical all along as to whether Team Fury actually wanted the fight. Fury had also been calling out the likes of Mahmoud Charr and Derek Chisora. ‘The Gypsy King’ had set a deadline of last Monday for Joshua’s team to respond to the contract, which they did, only a couple of day late.

“We have sent the final version of the contract back, they’ve come back with points and we were told that the fight is off by the man himself,” said Hearn.

This is a huge disappointment and kick in the teeth for boxing fans, who are desperate to see this super-fight happen.

“It’s still there. It’s still open for discussion. But we’re not going to play a game with a bloke that’s just coming out telling AJ it’s off, and then he’s a dosser, he’s got to sign it, etc.

“We’re not going to play a game. In our mind, Tyson Fury is not fighting Anthony Joshua. We’re more than happy to continue those conversations but what we’ve been told is the deadline has passed.”

It is evident that Hearn is still open to negotiations with the Fury camp, but that he is doubtful as to whether they were ever serious about the fight. The Matchroom Boxing kingpin insists he and Team Joshua were always up for the fight. Tyson Fury’s constant social media videos certainly didn’t help the situation one bit.