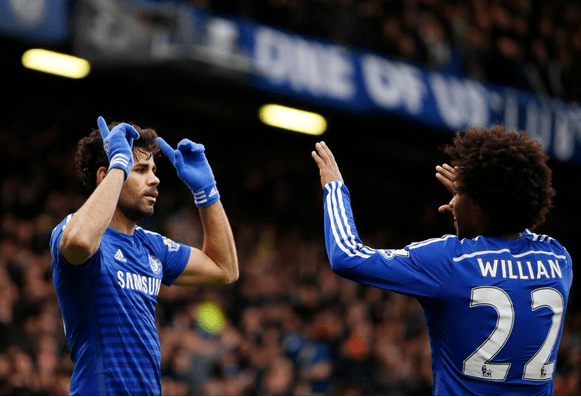 We have the latest Premier League rankings after Round 30 of the Barclays Premier League. The last weekend saw Chelsea earning a pulsating 3-2 victory over Hull City, where Diego Costa scored for the Blues. The Spain international after going seven matches without scoring has now scored in back to back games, taking his goal tally to 20 this season.

Despite this brilliant performance, Costa has failed to hold on to his third position in the EA Sport rankings, and has dropped down to #4th with 667 points, behind third placed Harry Kane.

Eden Hazard, however, has maintained his position at the top. The Belgian winger with an average EA Sports Player Performance Index score of 27, remains at top for the fourth consecutive week with 769 points.

Cesc Fabregas’ form has dipped since January; the Spaniard has swiftly dropped to #9 with 580 points behind Raheem Sterling.

Manchester United earned a significant 2-1 victory over Liverpool at Anfield on Sunday where skipper Wayne Rooney missed a penalty and couldn’t get his name on the scoresheet. The England skipper has dropped one place down in #12.

Arsenal are swiftly catching Manchester City in the league, and after earning the seventh consecutive victory, the Gunners are aiming higher to mount a late challenge for the title. Alexis Sanchez is at #2 with 694 points while Santi Cazorla maintains his #5th position in the table.