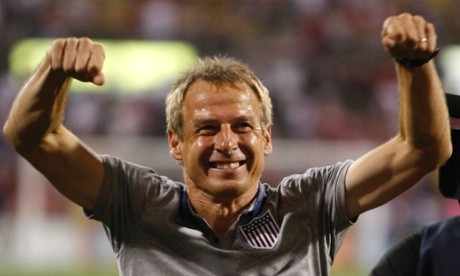 A conversion from Dempsey would have made the final score 3-0. 3-0 is a thumping in soccer, a thorough, convincing, deserved victory. 3-0 is a blowout. For the USA to beat Mexico 3-0? For Americans, that a certain kind of dreamland that has never been attained in a competitive match outside of the old and long forgotten US Cup.

But as great as 3-0 would have been, 2-0 is better. For us Americans, 2-0 is our score. Dos a cero. Time after time. It’s the scoreline that hurts Mexico most. It’s the scoreline that the legions of American supporters sang and portrayed throughout the night. Dos a cero. We own it. In Columbus, we own Mexico. 3-0 would have been awesome. 2-0 is perfect.

The irony of Dempsey’s penalty miss wasn’t lost on anyone in Crew Stadium. It was the first thing mentioned by Bob Ley after the match. The USA has beaten Mexico in Columbus by a scoreline of two goals to nil in a World Cup qualifier in Columbus every time they’ve played since 2001, and most importantly in the World Cup knockout stage in 2002.

On the face of it, it’s just another dos a cero. Sweet, but not unique. A deeper dive is required to see how improbable and amazing this 2-0 win was.

For years and years, the USA has closed the gap with Mexico. Both teams can be considered shoe-ins for the World Cup, and both teams have dominated their bitter rival at home over the last two decades.

But in the last two years, Mexico took off. A “golden generation” of young Mexican players with bags of pace, ability, and cohesion blew the US out in the 2011 Gold Cup Final at the Rose Bowl, and beat mighty Brazil to 2012 Olympic gold.

Meanwhile, the US sacked Bob Bradley, and struggled to adapt to Jurgen Klinsmann, trudging through a disappointing 2012. Things came to a head in March 2013.

The United States went down to defeat in San Pedro Sula in their first World Cup Qualifier against Honduras, and in the aftermath of the game, an article was published by Brain Straus which quoted players in the US team and other team sources about the overall incompetence of Klinsmann.

The German boss was accused of being out-of-touch with his team, lacking any semblance of tactical acumen, and spending too much time and money on regimens that didn’t translate to on-field performance.

Klinsmann brushed it all off. He said he wasn’t worried. He said, “These kind of comments are normal to me”. He did seem out of touch. Because Klinsmann’s team was disjointed and poor in Honduras as they had been when they barely scraped through the pre-Hex round of qualifying with a win on the final day, a campaign that included a loss to Jamaica and a draw against Canada, and Klinsmann wasn’t at all concerned. Everyone else was concerned.

For one of the best soccer players of his generation, Klinsmann looks geeky. He doesn’t look like your typical soccer coach. He doesn’t have a blinding stare, or wear a suit to games. Klinsmann’s appearance makes it easy to believe that he can motivate, but he couldn’t possibly know or care about the finer nuances of soccer.

But Jurgen Klinsmann thrives on pressure. He’s the coolest guy in the room. He believes in himself, and he believes in what he’s doing. Big games, adversity-packed moments, that’s what Klinsmann eats.

This is a man who scored 11 times in the World Cup and a further five in European Championships. Klinsmann’s goals propelled Germany to victory in the 1990 World Cup and ’96 Euros in England, and Klinsmann’s Germany team struggled in the run-up to the 2006 World Cup, but when it counted, Germany thrived and came within a whisker of the final, taking third place.

The US’ turnaround started in the snow game against Costa Rica in Denver. The Americans won 1-0, then on a short turnaround, a short-handed US team had to run the gauntlet in Estadio Azteca.

The Americans were without Tim Howard, Landon Donovan, and Matt Besler and Omar Gonzalez were starting their first game together in the center of defense. It was a brave performance by the United States. Another golden point. Klinsmann wore a t-shirt. 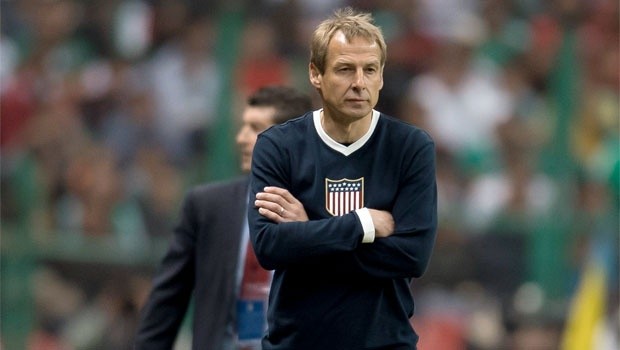 Perhaps that was the start of Mexico’s demise. While Klinsmann stayed strong and charismatic under pressure, his counter-part Chepo de la Torre floundered and flip-flopped – styles, tones, players. While Klinsmann gave Landon Donovan a shot to prove himself, Chepo froze the likes of Guillermo Ochoa and Carlos Vela out of the Mexico setup.

The Gold Cup was huge for the US. Klinsmann developed players, welcoming more and more faces to the national team and the spotlight. His charisma shined in the semi-final and final, which he watched from a suite with a trap door in Chicago.

If a manager believes in his system and his players, eventually those players will believe as well. Klinsi made Clint Dempsey captain, not because he’s the leader of the Americans, but because he wanted Dempsey to grow his game and his presence in the team.

In the buildup to the Mexico game, and in the game itself, Klinsmann was in his element. It was a beautiful thing to watch.

Despite a freak injury to General Bradley, a dive for the ages to get Matt Besler suspended, and a dumb suspension for Jozy Altidore, and a 3-1 thrashing in Costa Rica, Klinsmann was absolutely jovial in the buildup to the game. He talked about having players ready to fill in the spine of the team, and he talked about how this game would be a good test for the World Cup next summer.

Klinsmann had supreme confidence his team would qualify Tuesday night. His mind was already in Brazil.

Klinsmann had confidence because he rotated his squad and he played many different lineups and players for a night like Tuesday. Clarence Goodson literally stepped off a plane and into the heart of a defense that shut down Mexico.

It’s important to note that the USA has been blessed with great coaches in the 21st century. As Dos A Cero Part V was going down in Columbus, Bob Bradley took another step towards a historic World Cup with Egypt, and Bruce Arena had gotten the LA Galaxy into pole position to win a third consecutive MLS Cup.

But this 2-0 was all Klinsmann’s. Goofy as he looks, this is a man who knows what he’s doing. We should have known all along.