According to reports emanating from Portugal, Arsenal are on the verge of completing a £24m move for Manchester United and Chelsea target William Carvalho, with newspaper O Jogo claiming the deal for the Sporting Lisbon midfielder could be pushed through by the end of the week.

The Gunners, who have already spent heavily this summer on the likes of Alexis Sanchez and Callum Chambers, are now said to be closing in on Carvalho, who appeared twice for Portugal during the 2014 World Cup in Brazil, continuing Arsenal and Arsene Wenger’s stunning summer spending spree. 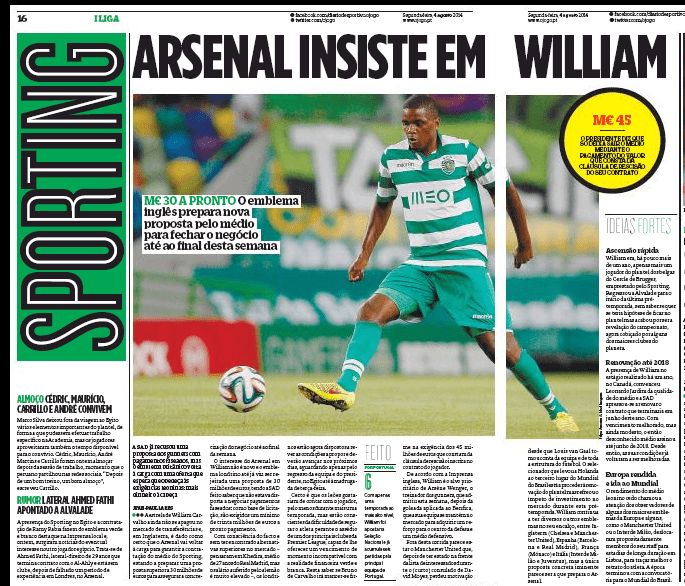 Manchester United and Chelsea have both shown an interest in the 22-year-old over the last year, with the player indicating back in March that he would be open to a move to Old Trafford in particular. However, since the sacking of David Moyes, the rumours have lessened, and with Chelsea seemingly satisfied since bringing in former Arsenal captain Cesc Fabregas, the way is clear for Wenger to complete a deal for the Portugal international.

O Jogo report that Arsenal had a bid rejected by Sporting last month on the basis of it being a installation-based payment scheme, and that the Portuguese side are looking to receive a fee in full for their midfield powerhouse.

Carvalho is said to have a £37m buyout clause in his current contract, but if reports are to be believed, Arsenal are confident of getting their man for cheaper, with a £24m bid in full expected this week.