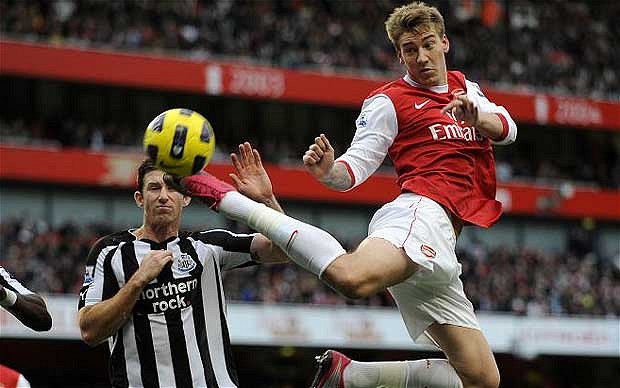 Former Arsenal striker Nicklas Bendtner has finally managed to find a club after Vfl Wolfsburg agreed a deal in signing him on Friday.

The Danish international’s contract expired at the end of the last season and was released by the club. The 26-year-old was a free agent earlier this summer and he has now signed a three-year deal with the Bundesliga outfit.

“The 26-year-old striker signed a three-year deal with the club and was presented officially on Friday.”

“Coming from the youth teams at FC Copenhagen, Bendtner then moved on to Arsenal in London, where he broke into the Gunners first team,” it added.

Meanwhile, the German outfit’s manager Dieter Hecking says he fits in the requirements of Wolfsburg and that is the reason behind in signing the former Gunners flop.

“We want to play a significant role in all three competitions this season and to do so, we need players who are used to such demands and capable of dealing with them,” Hecking said.

“Nicklas is exactly the kind of striker we had been looking for. He perfectly fulfils our specifications and he will strengthen our squad.”