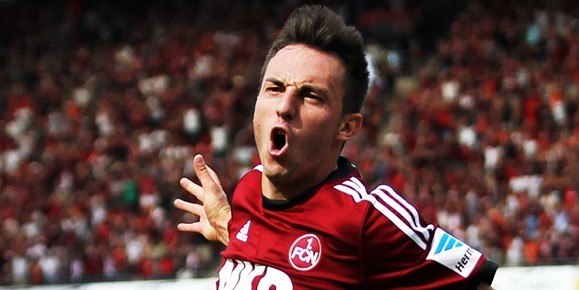 Drmic, 21, is having a superb Bundesliga season at Nurnberg, scoring 16 goals and grabbing 3 assists in 27 appearances, and has been linked with both Arsenal and bitter rivals Tottenham in the past month.

But it seems Arsenal have stolen a march on Spurs, with former Bayern and Germany legend Matthäus revealing that Drmic’s wife has been house-hunting in London.

My #sky colleague Lothar Matthäus just said on Sky: -Drmic’s wife has been looking for an appartment in London. Drmic will be Arsenal-player

The tweet, posted by influential footballer-turned-journalist Fjortoft, is the strongest indication yet that Drmic will be plying his trade at the Emirates next year. Fjortoft is widely credited with breaking the news of Mesut Ozil’s move to Arsenal last summer, and certainly has an eye for potential transfer dealings.

Drmic, a Swiss international, can play as a winger or a striker, having immaculate technique and decent dribble ability. He is also a deadly finisher, something which Arsenal desperately need with only Olivier Giroud to rely on up top at present.

His aformentioned 16 goals this season have taken him to second in the Bundesliga goalscoring charts, only one behind the leader Mario Mandzukic.

What do you think? Could Drmic be a star at Arsenal?