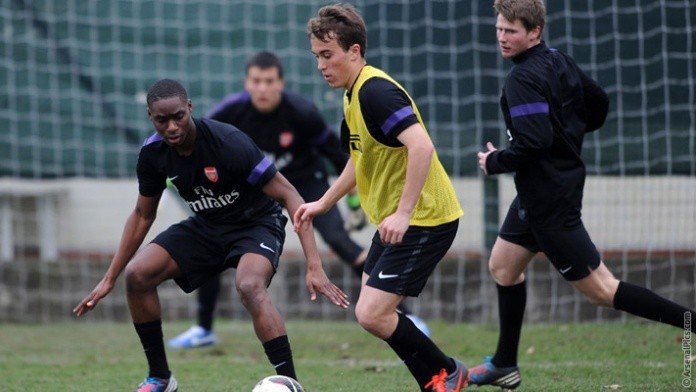 Arsenal have confirmed a loan move for their forward Austin Lipman to Boreham Wood on Thursday.

The 18-year-old spent the last few months of the previous campaign on-loan with the Conference South outfit. He has re-joined them now on a season-long loan.

“Austin Lipman has re-joined Vanarama Conference South side Boreham Wood FC on loan for the 2014/15 season,” a statement read on Arsenal’s official website.

“The 18-year-old forward spent three months on loan at Meadow Park last term, featuring 12 times in the league and twice in the FA Cup. Everyone at Arsenal wishes Austin well for his time with ex-Gunner Ian Allinson’s side.”

“Boreham Wood FC is offering Arsenal season ticket holders half priced entry to league matches at Meadow Park during the 2014/15 season,” it added.

Lipman’s profile in the Gunners’ official website suggest the English player is a goalscoring forward. Arsene Wenger would be hopeful he could make a return to the first team in the coming years.