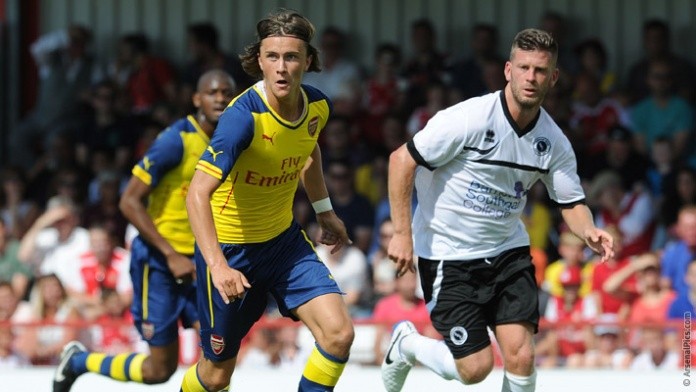 Arsenal have confirmed their midfielder Kristoffer Olsson has completed a permanent FC Midtjylland on Tuesday.

The teenager came up through the ranks of the Gunners’ youth setup before breaking into the first team in 2013. He featured for Arsenal once in the Capital One Cup clash against West Bromwich Albion last season.

Arsene Wenger allowed Olsson to join Midtjylland on-loan earlier in September and the midfielder has now made his transfer in the January transfer window.

A statement on Arsenal’s official website read, “Kristoffer Olsson has completed a permanent move to FC Midtjylland, where he has been on loan since September.”

“The 19-year-old midfielder featured six times in the league for the Danish club during his loan spell.”

“A Swedish youth international, Olsson made one first-team appearance for the Gunners, when he netted a penalty in the shoot-out win over West Bromwich Albion in the League Cup last season.

“Olsson also captained Arsenal’s under-19s to the quarter-finals of the UEFA Youth League in 2013/14. Everyone at Arsenal would like to thank Kristoffer for his contribution to the club, and to wish him well for the future,” it added.