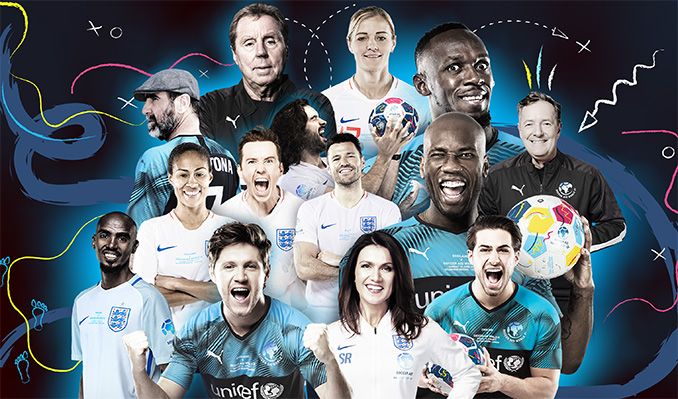 Former Premier League stars Didier Drogba and Robert Pires assessed the state of their old clubs as they trained at Stamford Bridge on Thursday to prepare for Soccer Aid.

Drogba insisted that “everything is going to be good” at Chelsea despite the departure of Eden Hazard and speculation that head coach Maurizio Sarri could follow him out of the club imminently.

Pires admitted that Arsenal’s UEFA Europa League final defeat to Chelsea last month means that all is not well for the club as they missed out on Champions League football for next season.

Quotes from the Q&A session are below:

“It’s always good. I’m always happy to be back here and this time it’s for another good cause. Yesterday we already raised a million pounds and the good thing is that government is going to match that fund. I’m really happy to contribute and make sure that Sunday is going to be sold out and we’re going to do that for a good, good, good reason.”

DD (on going up against John Terry in Soccer Aid):

“Well I played against him in training and once when I was at Galatasaray. It was difficult but I know him, he knows me, so we’re going to try to play, to be competitive, but to have fun also.”

“I’m really happy to be here at Stamford Bridge and to be playing with Robert. He’s one of the players I used to look up to when I was in second division. Let me be honest… and to come here to London and have the chance to compete against players like him, Thierry (Henry) and (Patrick) Vieira, for me it was like a test to see them play and to see where I have to go if I want to be one of the best. He’s a leader, for me.”

Robert Pires (on whether everything is ‘going to be good’ for Arsenal):

“Not really because unfortunately we lost the [Europa League] final against Chelsea but I think Unai Emery is doing well. Because the first season is not easy, especially in the Premier League because it’s very intense, very competitive, very tight, especially because he replaced Arsene Wenger.”

“For the first season I think he did a good job, so now the next season he needs to maybe rebuild the new team. I want to see Arsenal spend a lot of money for some players because the most important is always to try to win against Chelsea, Man City or Liverpool. So that’s why, for the moment, I’m happy with Unai Emery.”

Soccer Aid 2019 will be played on 16th June, Sunday at 18:30, and you can watch it live on ITV or STV. Managed by Harry Redknapp and Piers Morgan, the Soccer Aid World XI team will be playing against England, managed by Sam Allardyce and Susanna Reid. Tickets are available at SoccerAid.org.uk.