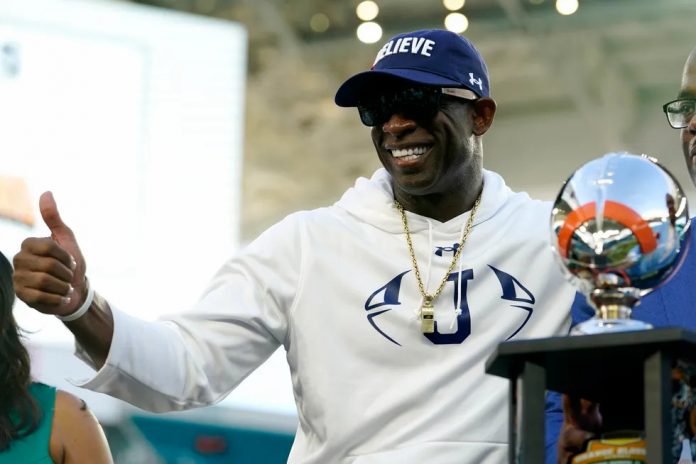 Deion Sanders is the head coach of the Jackson State football team and they have been one of the top HBCU football teams in the country throughout the past few years. Considering the type of talent that Sanders is able to get, it certainly makes sense why this team is as good as it currently is.

Jackson State currently sits at 2-0 on the season after a 59-3 win against Florida A&M and then a 16-3 win against Tennessee State over the weekend. After that win, Deion Sanders had some interesting things to say about playing teams that he doesn’t believe are better than his squad.

Sanders also touched on the fact that going to Tennessee and playing in this game might not be in their best interest moving forward.

“I don’t know what … well what I’m saying is we’ve got to do better business,” Sanders told reporters in Memphis Saturday night. “That’s what I was talking about. Whether we do it in Jackson (Mississippi) or Tennessee, I’m good. I’m good.

“If you get the busines right, we’ll do it here. But I’m for the business making sure these kids are straight. Not coming out there and needing to stop to borrow some gas money on the way back. That’s what this is about. I’m looking out for the best interest of our kids. That’s what I’m saying.”

With some of these comments that Deion Sanders is making here, it does pose the thought of if they’re going to be playing more competitive teams sometime in the near future. He’s managed to go out and recruit some of the best players in the entire country throughout the past few years, which means that Jackson State might have enough talent to compete with some of these big-time teams.

It will be interesting to see what Jackson State decides to do with some of their next few season schedules, but there is a good chance that they start adding some top 25 ranked opponents. If they can take on teams like the Florida State Seminoles, Florida Gators, and Miami Hurricanes, and end up beating those squads, Jackson State might be able to make a few more additions with some of these top recruits.