Arsenal head into their London derby on Saturday one point outside of the top four and with both Tottenham Hotspur and Liverpool breathing down their neck. Arsène Wenger’s side must see this match almost as a must win before their thoughts turn to AS Monaco on Wednesday night.

After a positive start under Alan Pardew, Crystal Palace have now only won one of their last four in all competitions, and are winless in their last three at Selhurst Park.

The top sites reviewed at GamblingSitesOnline.org are backing Arsenal for the away win – and with Giroud back and scoring goals, it will be a tough call to bet against the Gunners this weekend.

Mile Jedinak could make his first appearance of the New Year for Crystal Palace this weekend after coming back from the Asian Cup with a knee injury.

Shola Ameobi is not fit to play and Yaya Sanogo is ineligible to face his parent club this weekend.

Alexis Sánchez made his return in last weekend’s FA Cup victory over Middlesbrough and is good to go in this match.

Jack Wilshere says he’s ready to make his return in this match after spending nearly three months out following an ankle operation. 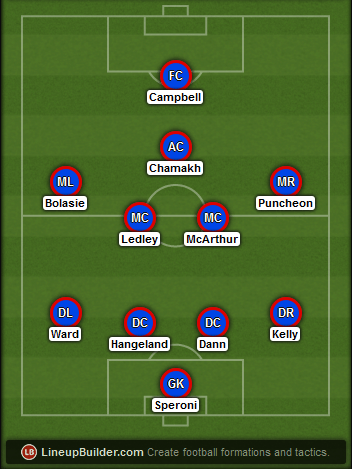 James McArthur and Joe Ledley will likely be the pair in front of the back four should Mile Jedinak not be past fit. Martin Kelly and Joel Ward have been the full-backs when fit this season. This lineup has pace down the wings to hit Arsenal on the counter attack and to feed Fraizer Campbell. Marouane Chamakh will likely play a deeper role, looking to win back possession for his team around the halfway line and in his own half. 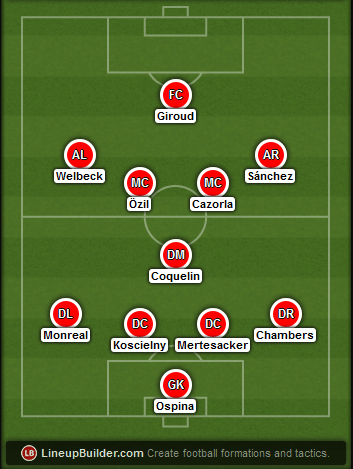 We’re going with Calum Chambers at right-back as Héctor Bellerín isn’t fully fit. Francis Coquelin can play in front of the defence on his own as Arsenal look to maintain the majority of possession. Santi Cazorla is capable of dropping back when his side are out of possession. Danny Welbeck can play on the left to allow Alexis Sánchez to play the position he’s been at his most-effective this season. Alternatively, Theo Walcott could play on the right and Sánchez out on the left.

Alexis Sánchez vs Joel Ward
Joel Ward is a dependable left-back but faces a tough task against one of the league’s very best this season. Alexis Sánchez has a useful Premier League debut when these two met in the opening weekend of the season. The Chilean created several chances for his teammates whilst also having a few shots on goal. He’s found his feet since and we expect him to terrorise Ward once more.

Santi Cazorla vs Joe Ledley
Santi Cazorla has had a couple of quiet games lately after showing tremendous form over the past couple of months. We see the Spaniard getting back to his best this weekend should he come up against Joe Ledley and James McArthur. Playing alongside Mesut Özil and potentially with the likes of Olivier Giroud, Alexis Sánchez and Danny Welbeck to supply, the playmaker could see more of the ball than any of his teammates this weeeknd, creating a fair few chances.

Olivier Giroud vs Brede Hangeland
Scott Dann and Brede Hangeland are both solid defenders in the air but Olivier Giroud has been in good form of late and capable of finding the back of the net with his feet. With all the playmakers around him you can expect the French striker to see a few sights on goal in this one and we’re expecting him to find the back of the net too.

Prediction: Crystal Palace 1- 2 Arsenal
Arsenal left it very late to win the reverse fixture between these two this season and we think they’ll do enough to collect three points once again versus Crystal Palace, this weekend. Alan Pardew’s side have lost their form of late and will find too much talent in their face to get anything from this match. It’s an even difficult task for them if Mile Jedinak doesn’t return.