Arsenal will be hoping to get their first points on the board this season in their second London derby following the surprise home defeat to West Ham last weekend.

Crystal Palace are the home side and they head into the weekend with three points to their name after being worthy winners over newly-promoted Norwich City to start the season.

The Gunners were 2-1 winners in this fixture back in February thanks to goals from Santi Cazorla and Olivier Giroud and have won all four fixtures between these two, scoring exactly two goals in each, over the past two seasons since Palace returned to the top flight.

Goalkeeper Julián Speroni will not play this month due to injury. Alex McCarthy made his debut in the 3-1 win over Norwich City last weekend.

Striker Fraizer is out with a hamstring injury whilst former Arsenal striker Marouane Chamakh is a doubt.

Alexis Sánchez was thrown on as a desperate substitute in the second half against West Ham tono avail last weekend. The Chilean had been expected to get rest after a late start to pre-season training following his participation at the Copa América earlier this summer. It’s likely he’ll be available to start this weekend.

Arsène Wenger has confirmed that both Jack Wilshere and Tomáš Rosický will not play this month. Wilshere has a fibula injury picked up in training before the FA Community Shield, whilst Rosický has undergone knee surgery following an injury picked up whilst on international duty with the Czech Republic in June.

Danny Welbeck is also a few weeks away from recovery. Héctor Bellerín is in contention again after missing out last weekend. 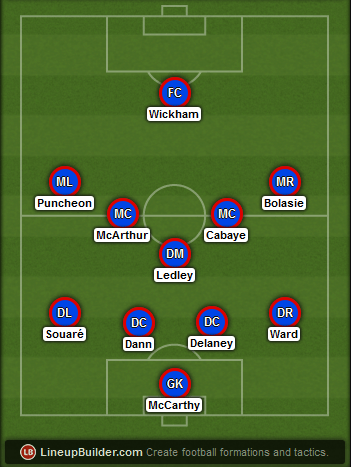 Alan Pardew plays a 4-5-1 formation which turns into a 4-3-3 when Crystal Palace are in possession. He has three pacey wingers to choose from out wide whilst former star Mile Jedinak is not in the picture these days. Glenn Murray started last weekend but I think we could see Connor Wickham versus Arsenal to hold up the ball and lay it off out wide as the home side probably won’t be expecting too much possession and time on the ball in the final third. 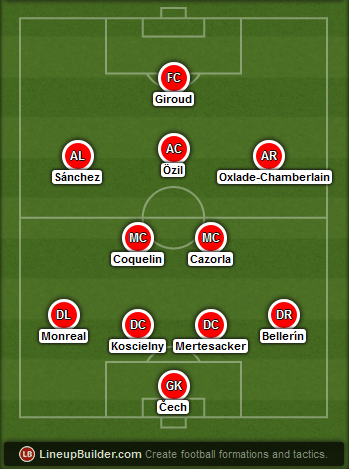 I don’t expect many changes to Arsène Wenger’s side despite last weekend’s poor performance but Héctor Bellerín and Alexis Sánchez returning would give it a very similar feel to the team that finished last season strongly. Olivier Giroud was very wasteful at home last weekend but he did get in some good positions. Theo Walcott’s pace may not be so threatening on a smaller pitch where the home side also play three centre midfielders to prevent the through balls down the middle.

Alexis Sánchez vs Joel Ward
If the Chilean star starts will he be able to hit top form after a short pre-season? Arsenal fans and neutrals alike will certainly be hoping he can excite at Selhurst Park. The home side have a solid defender in Joel Ward. Alexis Sánchez caused trouble down the right when Joel Ward was playing left-back in the home tie versus these two, which will be one year to the day on Sunday. He was also a key player in this fixture at Selhurst Park back in February, playing down the left wing with Ward the right-back. They know what to expect of each other and the Arsenal star has arguably had the better of the first two meetings.

Olivier Giroud vs Scott Dann
The French striker isn’t guaranteed to start but if he does Olivier Giroud had a number of efforts versus Crystal Palace last season, scoring the winner at Selhurst Park too. Palace’s centre-backs are good in the area and are tough players, but they will have a tough time dealing with the French striker if Arsenal are creating chances from out wide, and down the middle through Mesut Özil, Santi Cazorla and co.

Jason Puncheon vs Héctor Bellerín
Crystal Palace should see some opportunities on the counter attack, as well as from set piece deliveries by Yohann Cabaye. One of their threats could certainly be Jason Puncheon who was one of their stars at Norwich last weekend. He offers pace, a decent delivery and chips in with a couple of goals a season. Arsenal’s right-back likes to bomb forward but Héctor Bellerín may want to hold back a little in this one.

11 – Alan Pardew has won as many Premier League matches as Crystal Palace manager in history, tying Steve Coppell’s record last weekend. The former Newcastle manager has done it in only 19 games in charge too.

22 – Arsenal had more efforts on goal than any other side in the Premier League last weekend.