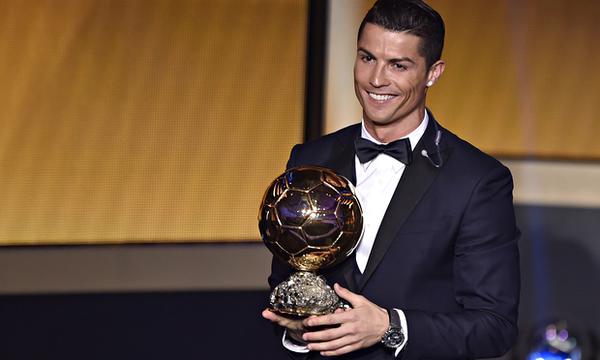 Cristiano Ronaldo is the FIFA Ballon d’Or winner for the year 2014. The Real Madrid star  fended off Barcelona’s Lionel Messi and Bayern Munich’s Manuel Neuer to the gong in a gala event held in Zurich in Switzerland. This is the second year in the row that the Portuguese has won the award, and the third time overall.

Football may be a team sport, but being adjudged the best individual player is an achievement every professional dreams about. FIFA Ballon d’Or award celebrates the individual who has dazzled, enchanted, mesmerised and delighted every football-watcher around the world with his displays throughout the year.

Ronaldo, the defending champion from 2013, had another incredible season for his club, scoring 51 goals in all competitions in 47 appearances. 17 of those goals came in the Champions League, an all-time record in the competition. Real went on to win the Copa Del Rey as well as the 10th European title in their history. His year with the Portuguese national team though, wasn’t as eventful as he only managed one goal in the World Cup in Brazil as his side were knocked out in the group stages. His outrageously good scoring record with his club though, has continued in the 2014/15, and he came into this event, in many eyes, as the favourite to retain his award.

Lionel Messi had a relatively lukewarm year by his hugely high standards. After scoring 60 goals in the 2012/13 campaign en route to winning his 4th consecutive Ballon d’Or Award two years ago, the Argentine only managed to find the back of the net 41 times last season. Also, his club side Barcelona went trophyless. In the World Cup, Messi captained Argentina to an unlikely 2nd-placed finish and was awarded the Golden Ball Award for the best player in the tournament. He did not come into this event as the favourite, but being adjudged the best player in the world for the fifth time was certainly something that could not have been ruled out.

Backstage with #Messi at The #BallondOr. Enjoy the show everyone ! pic.twitter.com/HYYf1vsoxQ — FIFA.com (@FIFAcom) January 12, 2015

Manuel Neuer is the first goalkeeper to be in the top 3 since Gianluigi Buffon finished as the runner-up back in 2006. The only goalkeeper to ever have been voted the best player in the world was Soviet Union stopper Lev Yashin back in 1963. Neuer had a real chance coming into this one. The 28 year-old has more or less revolutionised the art of goalkeeping, employing an unorthodox style by rushing out of his area at every opportunity and acting as a sweeper of sorts. He won the Bundesliga and DFB-Pokal with Bayern Munich before starring for his national side as they convincingly won the World Cup in Brazil.

The FIFPro Team of The Year threw up a few surprises, with the David Luiz making the cut and  There wasn’t a single player from the English Premier League who made the XI.

Luiz’s inclusion was followed by an outbreak on social media. He was often criticised for his defensive errors last year for both Chelsea, and was sold by the Blues for a bafflingly huge £50 million to Paris Saint-Germain. He was also the captain of the Brazilian side that shambolically capitulated by a 7-1 scoreline against Brazil in the World Cup semi-finals.

David Luiz when he finds out he is in Team Of The Year… pic.twitter.com/gXQ1Fx1W5o — ChelseaTalk (@TheBlues_Talk) January 12, 2015

The Coach of The Year for Men’s Football went to German coach Joachim Loew, who beat Real Madrid’s Carlo Ancelotti and Atletico Madrid’s Diego Simeone to the award.

The Puskas Award for the best goal scored in 2014 went to Columbia’s James Rodriguez for his incredible volley scored against Uruguay in the World Cup. He beat the Republic of Ireland’s Stephanie Roche and the Netherlands’ Robin Van Persie to the award.

FIFA #PUSKAS AWARD: The winner, as voted for by fans, is @JamesRodriguez #BallondOr http://t.co/oG79I0PfFi pic.twitter.com/6jwGy2r7WQ

The Women’s Player of The Year Award went to Germany’s Nadine Kessler, who had an outstanding year with her club side Wolfsburg.

With that, we come to the end of the event. The highlight of the evening, of course, was Cristiano Ronaldo winning his second consecutive Ballon d’Or. The results were decided based on votes by the captains, coaches and media representatives of all the member nations of FIFA. A list of who voted for whom can be found here. So, for another year at least, Ronaldo is undisputedly the best player in the world. At the rate he’s going this season though, a hattrick of awards may not be an impossible dream. But with the likes of Lionel Messi, Eden Hazard and Neymar all waiting in the wings, the Portuguese cannot afford to take his foot off the pedal. All in all, it promises to be an interesting 2015….