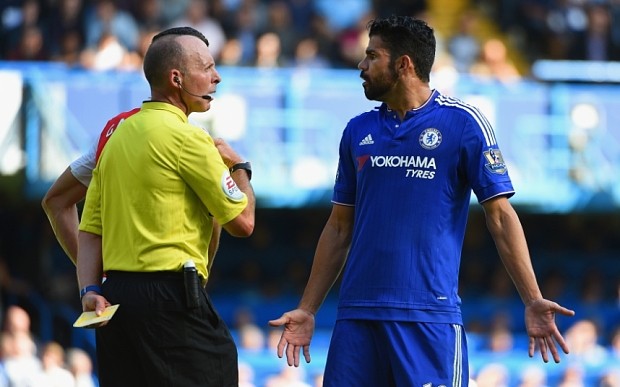 It was always going to be a heated clash at the Bridge yesterday as Chelsea took on rivals Arsenal.

The hard fought match saw Chelsea topple their North London counterparts 2-0, however, the actions of one man stole all the headlines.

That man was Diego Costa.

Costa returned to his controversial best in this clash gaining no friends throughout its entirety. The Chelsea frontman’s over-physicality saw the Arsenal players get increasing frustrated throughout the first half and lead to several confrontations.

This, unfortunately, resulted in Arsenal’s youngster Gabriel being sent off.

The controversy kicked off after Costa’s flailing arms continuously hit Arsenal defender Laurent Koscielny in the face leading to the boil-over. Both players initialled Gunners defender squared up against each other and engaged in a rather timid pushing and shoving contest.

Yet, the situation took a turn for the worst when for Arsenal’s Brazilian defender Gabriel rushed in to confront his counterpart.

In the heat of the moment, referee Mike Dean lost temporary control of the situation as the two players got in each others faces.

People watching the match thought that Diego Costa’s forcibly grabbed the back of Gabriel’s neck while this should have seen the Chelsea striker sent off. The referee took a cautionary approach booking both players.

This did nothing to quell tensions between the two and controversy ensued once more.

Both Gabriel and Costa returned to the center of the park still engaging in verbals. The confrontation took a controversial turn as Costa claimed that Gabriel kicked out at him.

Without seemingly seeing the incident Mike Dean sent off Gabriel with a straight red card. The decision left Arsenal fans and players furious as it looked as though Costa and the Chelsea players coerced the referee in making the decision.

Arsenal was left with ten men for the second half and their night got progressively worse from there. The Gunners were reduced to nine after Santi Cazorla was sent off ten minutes from time.

Wenger was furious at the post-match press conference at both Deigo Costa, Mike Dean’s officiating and called for the FA to investigate the Gabriel red card.

Diego Costa has been quite a controversial figure throughout his career and this incident won’t be his last. The Chelsea talismans physicality and ability to frustrate his opponents makes has made him one of the most difficult players to defend in the Premier League.

Costa, however, is known for having a short temper and tends to lose his cool throughout matches. Yet, a bewildering statistic is that Costa’s disciplinary record shows that he has not received a red card since 2012.

For a player that is constantly involved in physical confrontations with opponents, the fact he hasn’t received a single red card has left football fans shaking their heads.

The FA is reportedly awaiting Mike Dean’s report on the match before taking any action against the Chelsea striker. If Costa is found guilty of any misconduct, the striker could miss Chelsea’s upcoming domestic matches.

This would come as frustrating news for Jose Mourinho especially as the Chelsea has struggled in recent results.

Chelsea will hope their victory over Arsenal can be a turning point in their season as they turn their sights to a midweek cup match against Walsall and Newcastle next weekend.