The term ‘intensive media coverage’ is perfectly applicable to the Catalan press for their coverages of Juan Cuadrado transfer saga this summer.

Although at times, it seemed to us, they are waxing same lyrics on a daily basis, but no other newspapers have covered the saga with such details than both Mundo Deportivo and Sport.

Of course, it has a purpose. Barcelona are keen to replace Dani Alves and have targeted the Colombian to be the Brazilian’s long term successor. 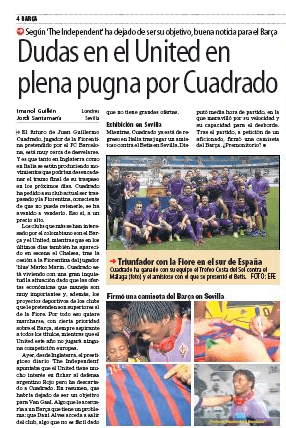 The interest was there since the turn of the year, but following Cuadrado’s outstanding World Cup campaign, Barcelona are alarmed that they are not the only one in the race to sign the highly rated defender.

The 20 times Premier League champions Manchester United are thought to be Barcelona’s main competitor here. If the reports are to be believed, the Red Devils had already tabled a lucrative offer for Cuadrado with high incentives for his agent were also offered.

It should leave the Old Trafford giants in driver seat but Catalan press believe at the same time that Barcelona are not out of the race yet and are preparing a counter bid, with the player himself probably prefers a move to the Nou Camp.

Mundo Deportivo in their regular one-story-must-everyday-for-Cuadrado section today claim that Premier League giants Chelsea have also registered their name among the lists of interested parties for Cuadrado.

The Blues recently sold Marko Marin on loan to Fiorentina, who want to resolve the issue within August 20, and in doing so have established a good relationship with the Serie A club, which might help them in landing Cuadrado, claims the newspaper.

Chelsea are already a strong defensive unit. Spaniard Cesar Azpilicueta can operate as both right and left back, so can’t see any reason why Jose Mourinho would need a wing-back at this moment.

Fiorentina have reportedly set his transfer value at €50m, which I think none of the interested clubs would be willing to match that figure. Barcelona are thought to be preparing a €40m package deal, which could be enough to secure his signature.