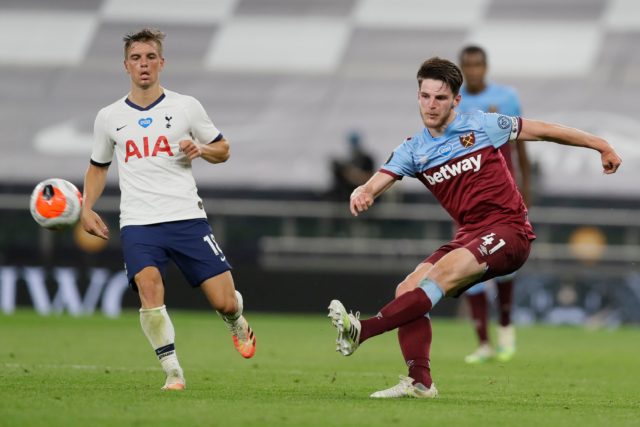 Chelsea are planning a final push for West Ham United midfielder Declan Rice and that could pave the way for the departure of Jorginho to Arsenal, The Mirror reports.

The west London side have gone on a mega spending spree this summer and they have already spent more than £220m on seven major signings.

Still, they are not finished with their spending for the transfer window and it is reported that manager Frank Lampard wants a new midfielder in the ranks before the deadline.

As per The Mirror, the Blues boss has Rice as one of his top priorities and the club are likely to make a late attempt to secure his services from the Hammers.

David Moyes’ side are currently reluctant to part ways with the 21-year-old and the Blues are aware that they may need a huge bid in order to convince them.

As such, they may need to recoup funds from player sales and it is reported that Jorginho could be one of the leading players heading for the exit door.

The Italy international has experienced a mixed run of fortunes with the Blues over the past two years and he has recently been linked with a move to the Gunners.

Jorginho was close to joining Manchester City in the summer of 2018 when the Blues hijacked the deal to sign him from Napoli.

Arteta was then the assistant manager to Pep Guardiola and it appears that he is interested in signing him for the Gunners, who are eyeing a new central midfielder.

The north London side have looked at the possibility of recruiting Thomas Partey and Houssem Aouar in recent weeks, but they have yet to finalise a deal for either.