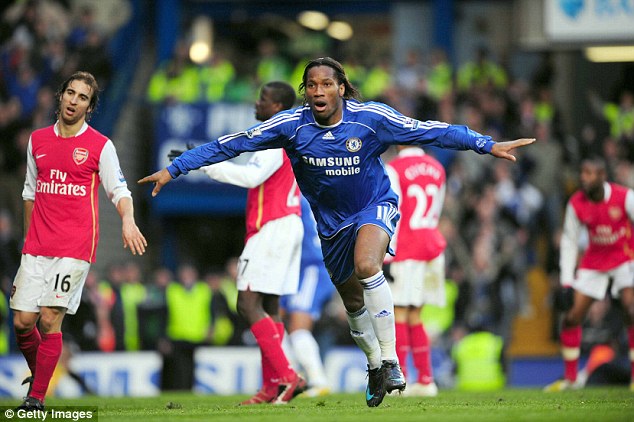 Chelsea manager Jose Mourinho has said in his press conference today that Didier Drogba is fit to play against Arsenal at the Emirates on Sunday, while Diego Costa also has a chance of making it. This is a huge boost for the Blues ahead of facing their nearest rivals, as it was earlier believed that they would not have even one of their three first-team strikers fit.

Drogba picked up an ankle injury in the week, while Costa picked up a hamstring injury in the game against Stoke earlier this month. The Spaniard, who has 19 Premier League goals to his name this season, has been a talismanic figure for Chelsea up front. Mourinho said that he will take a call on him tomorrow, before saying that even if he doesn’t play against Arsenal, he surely will feature against Leicester City on Wednesday. Loic Remy, who is out with a calf injury, is unlikely to be fit for Sunday.

Mourinho says Drogba is fine to play, Remy ‘not for sure’, and he will make a decision on Diego Costa tomorrow. #CFC

Drogba being fit can hardly be good news for Arsenal, as the Ivorian has proved to be the Gunners’ nemesis over the years. In 15 games against Wenger’s men with Chelsea and Galatasaray, he has scored 15 goals, averaging a goal every 78 minutes. He may be 37 years old now, but he has shown this season that there is still life left in his legs. Chelsea faced a similar injury crisis when they travelled to Old Trafford in October last year, but Drogba silenced his critics with a thunderous headed goal which almost turned out to be the winner.

He has played the full 90 minutes in the last two games as well, against Queens Park Rangers a fortnight back and against United last week. While he is a shadow of his former self and has lost quite a bit of his pace, one certainly cannot discount his quality and experience. This Chelsea fan thinks that against Arsenal, Drogba is sure to make an impression no matter what:

With Chelsea set to play a counter-attacking style of football, you would think that Drogba will get at least one chance from a long ball played in behind the Arsenal backline. Imagine a situation in which that ball is played by Fabregas, and the striker manages to find the back of the net.