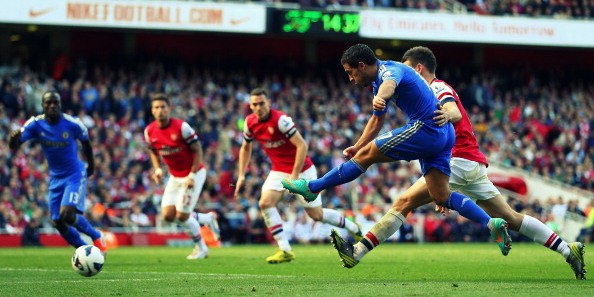 The Premier League have a problem, and it’s an unlikely one: Arsenal and Chelsea could be joint-third after the last round of Premier League games this weekend – IF Arsenal beat Newcastle United 2-1 and Chelsea draw 0-0 at home to Everton.

IF this happens – the two clubs be joint on points, goal-difference and goals scored – and will have to play one or more play off games on neutral grounds to decide the eventual 3rd placed team (and the winner of the automatic Champions League qualification spot).

“If at the end of the season … the question of qualification for other competitions cannot be determined because two or more clubs are equal on points, goal difference and goals scored, the clubs concerned shall play off one or more deciding league matches on neutral grounds, the format, timing and venue of which shall be determined by the board.”

As I said at the start, this is not a likely issue – Arsenal may win 2-1 but they are more likely to score more than two against a Newcastle side safe from relegation and with nothing to play for. On the other hand, while Everton may get a draw out of the game, Chelsea are almost guaranteed to score, and as such they’re in little danger of having to go through a play-off.

If the play-off situation occurs, then it becomes a near-disastrous issue for Chelsea – the Blues have an end-of-season tour to the USA to play friendlies against Manchester City next week (St Louis on 23 May and New York on 25 May) and then there are England friendlies on 29th May against the Republic of Ireland and then in Brazil on 2nd June.

Chelsea will not want to disrupt their post-season friendlies which are part of the club’s push into the US market, while the FA will not look kindly on players withdrawing from a prestigious away friendly in Brazil to play a league game.

It’s not going to happen though – Arsenal could lose and allow Tottenham to squeak ahead into the Champions League, or Chelsea could thrash Everton and make 3rd place their own.

We’ll have to wait till Sunday – but with the relegated teams already decided, the Champions League race is the only thing keeping the final day interesting.