We bring you a roundup of all the latest transfer stories including Chelsea’s staggering offer for an exciting Porto midfielder while a Arsenal target has been offered a new deal.

The London Evening Standard reports that Chelsea are preparing a £29m offer for Porto midfielder Ruben Neves in the next summer transfer window. We reported yesterday that Jose Mourinho ran the rule over the youngster during Chelsea’s Champions League clash with Porto, earlier this week.

Neves has a £29m release clause in his contract and has also attracted interest from Spanish giants Real Madrid and Barcelona. Chelsea meanwhile have been sending scouts to watch the 18 year old in action and Mourinho believes that the young defensive midfielder will add to the Blues’ squad strength.

The reports states that Chelsea are convinced by Neves’ abilities but are unlikely to move for the player in January. There is no doubt that Neves will be an excellent addition but it represents more a gamble form the London side to acquire a youngster who is relatively inexperienced in the international circuit.

Arsenal in pole position to sign Nolito after Barcelona opt out:

Spanish media outlet Sport has revealed that Barcelona have decided to end their pursuit of Celta Vigo striker Nolito. Arsenal are thus in pole position to sign the 28 year who reportedly has a €24m buyout clause.

It is reported that Barcelona have been put off by Celta Vigo’s evaluation of the player and the Camp Nou side are now looking at younger alternatives to replace Pedro in their squad. Despite the €24m clause, the report states that Celta could let the player leave for €20m. The report states that Nolito’s agent is listening to offers and the striker could move in the January transfer window.

Nolito has made a strong start to the season having scored 5 goals, grabbing 3 assists in 7 games so far. the Spaniard played a crucial role for his side who beat Barcelona by 4-1 in the La lIga earlier in September.

The Metro reports that Spanish side Sevilla will offer Polish midfielder Grzegorz Krychowiak a new contract to foil Arsenal’s attempt to sign the player. 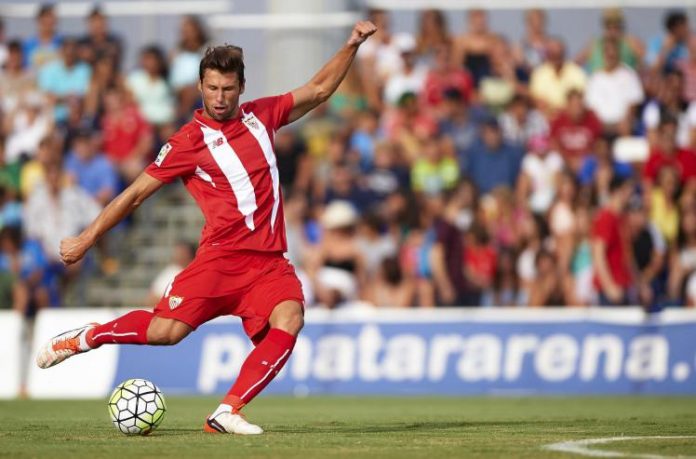 The 25 year old defensive midfielder has been a long term target for the Gunners who want to sign a hard tackling player in the middle of the park. Krychowiak is exactly the player who would suit into this role and would improve the London side’s squad significantly.

The report states that the Pole has a release clause of around £22.3m, a figure that Arsenal could be willing to pay to acquire his services. Thus Sevilla will try to convince him to sign a new contract and also raise his release clause to fend off Arsenal’s interest.