In fact, if you were Michel Platini and were reading Soccerlens during your lunch break, the following statistic will give you proof that recent English domination of European football is unlike anything European cup competitions have seen for for quite some time.

For the third season in a row, the semifinals of the Champions League will consist of three English sides and one team from another nation. These three occasions constitute a European record. West Germany and Spain have produced three semifinalists in European competition in two separate seasons. Italy has performed the feat once.

Most representatives from same nation in semifinals of European competition

The Premier League’s Big Four are the strongest foursome in club football today, although it must be said that individual teams from Spain and Italy are always capable of breaking through this English stranglehold on European football (Milan in 2007, potentially Barcelona this season) and historically have been more consistent than Premier League sides.

Will Manchester United and Chelsea – both on their third consecutive Champions League semifinal appearance – be back next season to make it four in a row? If they do so, they’ll match the Juventus side of late nineties and the Madrid side from the start of the decade as the most consistent teams in the Champions League era.

Most successive semifinal appearances in CL main competition (since 1992/1993)

But enough statistics – let’s look at the big matchups this week: 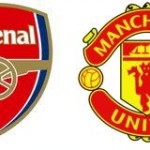 Momentum is a funny thing. Till last week United seemed to hanging by the barest of threads to their ‘quintuple’ hopes, so much so that Ferguson sacrificed a winnable FA Cup semi-final against Everton so that his star players could rest before a punishing schedule of 7 league games and 2 (or 3) Champions League games being played one every 3-4 days.

Arsenal on the other hand were coming off a 19-game unbeaten streak in the Premier League and an adrenaline-filled 4-4 draw at Anfield (a game some say they should have won, what with Fabregas’ disallowed goal). If their players could stay fit, they had the ability to neutralise United’s misfiring attack, slice through their porous defence and progress to the finals in Rome.

And then, Saturday happened.

In a game of two halves, United lost the first one 2-0 and won the second one 5-0, keeping them in the driving seat as far as the league title is concerned but definitely puts a strain on their top players with Rooney, Berbatov, Carrick, Ronaldo, Evra, Rio and Vidic all playing the full 90 minutes. In terms of the Champions League however, this determination may well make up for their lack of consistency in defence and help them defeat Arsenal.

On the other hand, United’s hot-and-cold form (and their need to keep winning in the league as opposed to Arsenal’s almost-guaranteed 4th spot) gives Arsenal an advantage going into this tie and with Almunia, Adebayor and Fabregas back, you can expect Arsenal to exploit this by working harder than ever to keep the ball and force defensive mistakes from United.

Can United go through? A repeat of last-year’s defensive solidity seems unlikely, so we they end up needing another 5 minute blitz to pull them through. 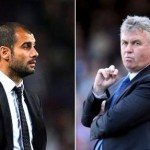 While Manchester United and Arsenal have never met in Europe before, Barcelona and Chelsea have met a few times in recent years although with Jose Mourinho gone the intense rivalry might have lost it’s edge somewhat.

Last year when Manchester United played Barcelona (I can hear you bitch about United putting 10 men behind the ball from over here, no need to shout), they showed one way of beating the strongest team (going forward) in Europe – restrict passing options, deny them space to move into, defend from the front, and rely on fast breakaways to create scoring opportunities.

Barcelona have improved from last season in so perhaps the best option available to Chelsea could be to have a real go at this game and turn it into a high-tempo, physical contest and force Barcelona to defend rather than just attack attack attack. They’ll still need to keep it tight at the back, and that will require this Chelsea defence + Essien to play the game(s) of their lifetimes.

The biggest problem for Barcelona will be the expectations going into this game – after the thumping Bayern got at their hands, most people expect them to dispatch Chelsea in similar fashion. It’s simply not going to happen, not with the more experienced coach and dare I say, better set of players. They’ll need to keep a clean sheet at home because at Stamford Bridge you can expect Chelsea to at least draw that game, if not squeeze out a win.