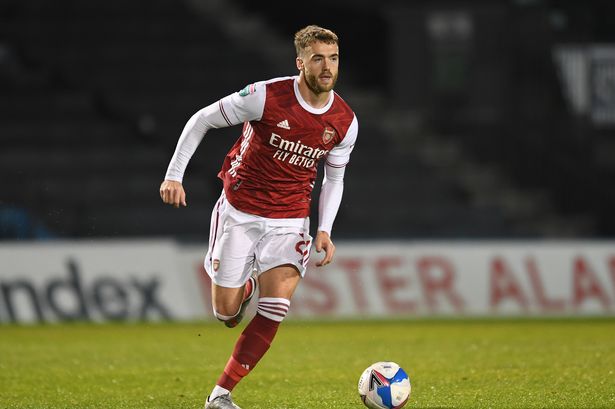 Callum Chambers has said that Arsenal manager Mikel Arteta wants ball-playing central defenders at the club and that he sees himself as that kind of player.

The 25-year-old has returned to full fitness after suffering an anterior cruciate ligament injury in Arteta’s early days at the club in a 2-1 defeat to Chelsea at the Emirates. He started for the Gunners for the first time since that game in the club’s 4-2 win over Irish side Dundalk in the Europa League. Eddie Nketiah, Mohamed Elneny, Joe Willock and Folarin Balogun were the goalscorers.

Thursday evening’s victory made Arsenal the only side in the continent to win all six games in the group stage of a European competition this season. Arteta’s side have qualified for the Round of 32 of the Europa League and will discover their opponents on December 14th which is when the draw is scheduled to take place.

The English defender said that he and the entire playing squad love the Spaniard’s philosophy, his coaching methods and the way he wants his team to play football. Chambers made it clear that while his ideal position is at centre back, he would be more than willing to take any opportunity given to him and would readily play at full back. Chambers is not the quickest but has been played at right back quite a few times in his Arsenal career.

“As I said there’s never a good time for an injury like this, but the timing was bad. We all love the philosophy and the way he coaches and the way he wants to play. He wants ball-playing centre halves and that’s what I see myself as. So I like to think I fit into his plans. As I said before, it’s a case of me being patient and getting back to the level I was at before. And every opportunity I get given, just give it 100 per cent and do the best I can.”

The former Southampton defender talked about how his stint at Fulham, where he played in central midfield, helped him improve and develop a better understanding of when the midfielder wants a pass and when he doesn’t. He said that his experience playing at right back has refined his game in a similar way.

On whether playing in central midfield during his time at Fulham improved his game, he said:

“Definitely. My time at Fulham was amazing and I learnt a lot from playing in that position. That made me appreciate it when I dropped back to centre back. I understood the role of a midfielder and when he wants the ball and when he doesn’t want the ball and the communication they need in there. So for sure learning another position helps you in general. I have always felt that. It’s the same with right back. Learning how to play there and understanding what a right back needs from a centre back gives you such a good knowledge of the game. It helps so much.”

Prior to his injury, Chambers was one of Arsenal’s most important players in defence. The 25-year-old struggled to force his way into the first team for many years but established himself as a crucial part of the senior side in the 2019/20 season before his campaign was ended by a serious injury. He played 18 games in all competitions and if not for his ACL injury, it is completely possible that he would have retained his position in the first team under Mikel Arteta.

It has been reported that Arteta is keen on signing a right-footed central defender as David Luiz, Shkodran Mustafi and Sokratis will be free agents in the summer. If Chambers can get back to his best and rediscover the form he showed last season, he could provide the Arsenal boss with an internal solution which would then allow the Gunners to focus on attacking reinforcements.