It would appear that the years of conjecture, rumour and speculation have ultimately taken their toll on Arsenal midfielder ‘Cesc Fabregas, who is reported to have finally bowed to Barcelona’s relentless pursuit and told his manager Arsene Wenger that he wishes to leave north London and return to his boyhood club.

Having held talks with Wenger regarding his future yesterday, Fabregas has seemingly decided that now is the right time to fly the Emirates nest. It has been alleged in several sources that the Spaniard made his decision after hearing of Arsenal’s summer transfer targets, the calibre of which spoke volumes about Wenger’s immediate ambitions – or lack thereof.

After the initial storm of hyperbole passed yesterday, a more gentle sky, heavy with an air of submissive inevitability, seems to have been left in it’s place – especially in today’s press.

Many journalists seem to think that the only sticking point keeping Fabregas at Arsenal is the two club’s failure to agree on a suitable fee. Barcelona are perfectly willing to part with £30 million, whereas Arsenal are holding out for a much higher fee (think £50 million) for their talismanic captain.

The haggling may roll on for a few days, maybe even a few weeks, and the Gunner’s may be able to eek a few extra £million out of the Catalan giants in the process, but I fear it will ultimately be futile on Wenger’s part. Fabregas has not just iterated his desire to leave the Emirates, he has also categorically stated which club he intends to join, therefore leaving Arsenal without a market and without any other club to play Barca off against.

As is Barcelona’s style when it comes to their marquee signings of late, you can probably expect to see a succession of ‘makeweights’ being offered in a bid to bridge the valuation gap between the two clubs.

Samuel Eto’o was used as ballast in Barcelona’s bid to sign Zlatan Ibrahimovic from Inter Milan last summer and ironically it has been speculated that the Swedish striker could find himself in the same position just 10 months later.

However, with Arsenal so close to tying up a deal for a new striker (namely, Marouane Chamakh) they are unlikely to be tempted by a move for Ibrahimovic. A more viable solution being mooted is a £30 million part-exchange deal that would see Barcelona’s Ivorian holding man Yaya Toure trading places with Fabregas in the Arsenal midfield.

Toure, whilst not a direct replacement for Fabregas, could provide some much needed physical presence in the Arsenal spine, and the accompanying balance could be put to use bringing in one or two world class additions to the Gunner’s squad (Everton’s Mikel Arteta, Bordeaux’s Yoann Gourcuff…).

Whilst Fabregas’ departure will leave a void in the Arsenal squad in terms of creativity, goals and leadership, the damage his leaving will have psychologically may be more keenly felt. Arsene Wenger is not accustomed to seeing his key players leave the club on their terms, and is much more used to letting players move on as-and-when he sees fit. 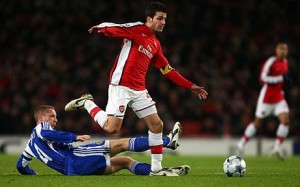 Fabregas is the hub of the current Arsenal team. Everything flows through him, and most of his teammates (junior and senior) look to him for that spark and inspiration his enterprising style of play so naturally emits.

However, the 24-year-old is not wholly irreplaceable. Arsenal have a wealth of midfield talent, readily-available, that is capable of making the step up to fill the void left by their seemingly outbound captain.

Samir Nasri (in-between injuries) has flourished when asked to play in a central role this season and even Abou Diaby (despite his obvious flaws) has shown signs that the potential is there for him to fill the soon-to-be vacant post. 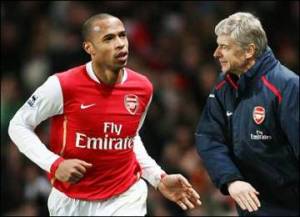 Arsenal have lost some big names before (Thierry Henry, Patrick Vieira – although, admittedly,  they were both at more ‘advanced’ stages in their respective careers) and managed to survive.

Whilst losing Fabregas to Barcelona would be an significant blow to an emergent Arsenal side, I think the sizeable transfer fee recouped would allow Arsene Wenger to bolster those weaker areas of his squad that didn’t seem quite so evident when all eyes were on his captain.

What do you think? Is there life after ‘Cesc for Arsenal?