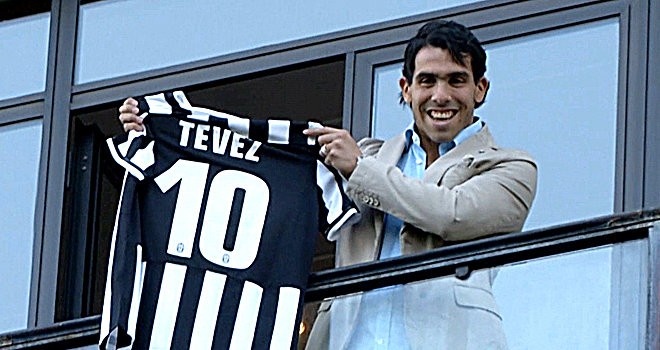 There can be no doubting Alessandro Del Piero’s enduring legacy on the Italian game. The diminutive Italian submitted defenders to an almost two-decade-long torrent of footballing abuse for Juventus; showed genuine humility and loyalty to drop down a division with his beloved ‘Old Lady’, and all the while evolving into an Italian icon for many of the up and coming youth to aspire to.

His name is among the most famous in the history of Italian football, and it is a genuine pleasure to see him continue to delight audiences, now with Sydney FC in Australia, turning in lavish performances of style and poise, as well as showing off his dazzling dead ball ability.

Now, after only a year of retirement, Del Piero’s hallowed no. 10 shirt has been plucked from retirement, and handed to a successor; Carlos Tevez. The former Man City striker is the man charged with reinvigorating Juventus’ unconvincing strike force (one that only last year contained the likes of new West Brom signing, Nicolas Anelka, and Arsenal outcast, Niklas Bendtner). The Argentine knows the significance of the shirt, as he told the Italian press on his unveiling,

“Top players have worn it before and I was No10 with Boca [Juniors] before, and [Diego] Maradona played in it too, so the great responsibility is now that I’m going to play in this great club so certainly the greatest challenge is to do my best.

“Obviously I didn’t want to forget Del Piero who was the last player to wear No10. He is a person and player that I greatly respect and who certainly represents an emblem and symbol of esteem. It is a great pleasure and honour to wear this jersey with his number.”

The signing of Tevez, coupled with the arrival of Fernando Llorente from Atletico Bilbao, are real signs of intent from the Italian club, who are well on the way to recapturing past glories, having triumphantly re-emerged from one of the lowest ebbs in their history.

Tevez is undoubtedly a decent striker. His aggressive nature, coupled with a wonderful touch, and fearsome power made him one of the most feared strikers in the Premier League over many years. Tevez scored 114 times in 266 games for three different clubs during his time in England; and won three Premier League titles, an FA Cup, a League Cup, a Champions league, a World Club Cup, and two Community Shields. The Argentine also secured a Premier League Golden Boot in 2010-2011 while playing for Manchester City, which he shared with Man United striker, Dimitar Berbatov.

But while his pedigree is evident, is he really the man to replace the great Del Piero?

One of Del Piero’s distinct traits was his loyalty, rather his almost unbreakable attachment to Juventus, even in the club’s darkest moments. His descent into the hell that was Serie B with the then fallen Italian giants was the standout moment of clarity in the relationship between club and player. During the match-fixing scandal, ‘Calciopoli’, that ultimately condemned Juventus to relegation in 2006, Del Piero said, in reference to the Juventus nickname,

A poetic touch, so seldom seen in football; the scale of his importance to the Italian club can be further typified by midfielder, Rubén Olivera’s comments upon his arrival to the club in 2003,

“Del Piero is my idol,” said the Uruguayan,

When I arrived at Juventus and I was introduced to Alex, it was like touching the heavens with my finger”.

Tevez’s time at City will unfortunately be remembered by the war of attrition between himself and his former manager, Roberto Mancini. The then 27-year-old striker went AWOL after an infamous bust-up on the touchline during a Champions league match against Bayern Munich in 2011. The then Man City boss, Mancini, told reporters after the match that Tevez was ‘finished’ at the club, after reportedly refusing to take to the field at his request.

The situation lasted four months, and the entire affair left a bitter aftertaste.

But that same manager who was so bitterly embroiled with the new Juve man has sung his praises, claiming that there is no better man for the job,

“Carlos is one of the most talented strikers in the world, with Juve he will be a step above the others in Italy,” the 48-year-old told Tuttosport.

“He has just been handed the No.10 jersey, formerly worn by Del Piero. Alex will always be remembered as a Juventus legend but I think Carlos will be a worthy successor. Indeed, he is the right man to wear the 10 on his back.”

Whether Tevez can handle the pressure of inheriting a number that, other than Del Piero, has been worn by the likes of Michel Platini and Roberto Baggio, remains to be seen. Tevez is arguably more of an outright goal scorer than his more creative, recent predecessor, but there is no reason why he couldn’t have a big impact on the club.

At £12m, Juventus have got themselves a bargain, but the 29-year-old must just hope the Juve fans give him time; but those same fans will be hoping the Argentine returns the favour.

Carlos Tevez should, most importantly, be judged on his own merits and abilities, rather than be compared to one of greatest second-strikers football has ever seen.