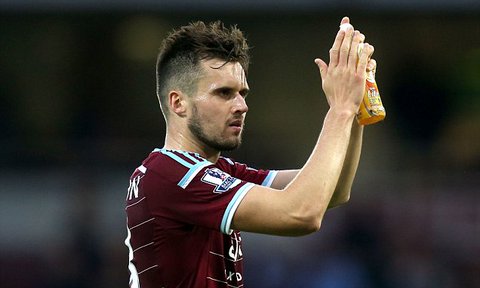 The England U21 full back will also return to West Ham on loan for the 15/16 season, after making 36 Premier League appearances for the Hammers last time out. There is also no clause in the loan deal that gives West Ham the option to sign Jenkinson permanently at the end of the loan period.

Jenkinson returns from an individually successful U21 tournament, where he was England’s best & most consistent performer following on from his good form for West Ham the previous season. There was interest from Sunderland & Southampton also, but Jenkinson was always keen to re-sign for West Ham.

Jenkinson clearly feels as though he’ll be able to break into the Arsenal starting XI next season, despite the emergence of Hector Bellerin, Mathieu Debuchy & Calum Chambers, Arsenal’s seemingly preferred full-backs. It will be interesting to see at the end of the season the comparative success of Jenkinson against Arsenal’s regular right-back for the season and whether Jenkinson would be an improvement on the incumbent.

Arsene Wenger has stated  that he doesn’t want to lose Jenkinson, but with their abundance of players in that position a loan was “a good compromise”, while West Ham were pushing for a permanent deal. The only way Jenkinson would become Arsenal’s regular no.2 would be if he had an exceptional season for West Ham, surpassing his last and for Bellerin, Debuchy & Chambers to completely regress from their current progress.

This isn’t to suggest that Jenkinson is a wholly inferior player to his team-mates, but with the difference in playing for a top 4 club competing across multiple domestic & European competitions, compared to a team with ambitions of breaking into the top 8 & a Europa League campaign via a fair play award, Jenkinson may not quite be in the top bracket yet, hence the extended deal & loan for Premier League experience.

Good business for Arsenal then as they are again getting a hefty loan fee from West Ham for the second season running, whilst taking wages off their books but also ensuring invaluable first team experience to a player still developing.

West Ham are seemingly putting all their eggs in one basket, as currently Joey O’Brien is the only cover following Guy Demel’s release during the summer and attentions seemingly turned towards a striker as the clubs next transfer priority.