Under David Moyes, Manchester United are third-favourites in most people’s books to retain their Premier League title, behind Chelsea and Manchester City. The change in management, the first at the club in 26 years, saw many pundits cast a doubting eye over the current group of players at Old Trafford and question their ability to win the league in the absence of Sir Alex Ferguson at the helm.

The aspect of Moyes which was most admired at Everton was his ability to get the best out of every individual in his squad. And if Wayne Rooney is to be believed, he is en route to doing the same at Manchester United as well.

Rooney stated how Moyes’ training regime at United is much more intense than that of his predecessor Sir Alex, and how is was helping him personally to get his fitness back and improve his performances.

‘The training is a bit different under the new manager,’ Rooney revealed, ‘I remember it from Everton, it’s more intense. But that’s helping me. I feel good and am glad to be out playing.’

‘It’s good to work under him and hopefully we’ll be successful together. I feel great’, he added.

Rooney has scored 3 goals in his last 2 appearances for Manchester United, and reached the 200-goal mark for the club in midweek with a brilliant brace against Bayer Leverkusen in the Champions League.

With Wayne Rooney, Manchester United often used to say that he needed to work harder in training and play regularly to retain match sharpness. There had also been veiled comments about his off-the-pitch activities and how they weren’t conducive to the high performances required from him.

But just as every player is different, the training methods that suit them are different as well. It’s more than just knowing which brand of whey protein and recovery shakes a player prefers, it’s also about creating customised training routines for each individual, including work load and post-match recovery.

With Rooney, instead of hoping that he would take care of himself better off the pitch, United seem to have taken no chances this season to ensure that he is at his best by working him hard on the training ground. It also helps that psychologically, the challenge given to him to perform better despite not being granted his wishes to leave seems to have helped bring the best out of him.

And this could very well help United make a strong push for the title.

Sir Alex often won titles purely on the basis of his wiliness and experience. Even without the best side on paper, he would manage to guide them to league successes on a regular basis. Moyes may not be able to do that, at least in his first few seasons at the club.

For now, it seems, Moyes is resorting to the good old principle of hard work to get the best out of this side. Sources say that his approach to training is much more hands-on that Sir Alex, who delegated most training-related duties to his assistants. 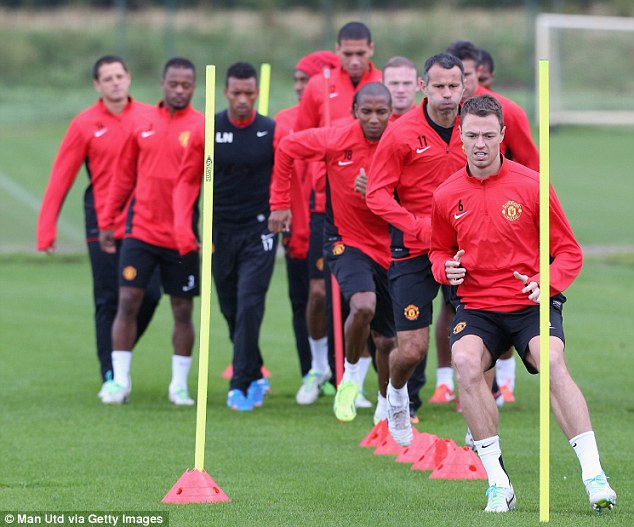 Changes: Moyes has a new training regime in place, but can it help United beat City and Chelsea to the title?

Tuesday’s game against Leverkusen saw United play some attractive football, while also managing to clinch a comfortable victory. Swift passing and movement in midfield and in attack were prominent features of that game for United, something they had not managed to achieve previously this season. Also, the performances of the likes of Antonio Valencia and Ashley Young have certainly gone up a notch from the previous campaign.

Sunday’s game against neighbours Manchester City though, will provide a much better review on whether Moyes’ new training regime is actually starting to bear fruit.

Moyes has not got exactly the kind of start he would have been hoping for at Old Trafford. With a defeat to arch-rivals Liverpool already under his belt, he sees his side playing catch-up to City, Arsenal and Tottenham. Even though we’re only 4 games into the new campaign, a good start is imperative for Moyes to kick on in his pursuit to carry on Sir Alex’s legacy.

Moyes’ new training regime will come good in the long run, but for United to stake a serious claim to win the Premier League title, they may need to spend some money in the January transfer window. There is no doubt that they need to strengthen their midfield further, which still looks a bit lightweight after the addition of Marouane Fellaini. For now though, Moyes is moving in the right direction and if he can get the best of his side like he did in his time at Everton, the Premier League crown will be no wishful thinking.