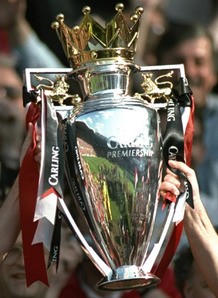 Last season saw domestic dominance return to the north of England, with Manchester’s top clubs claiming the two biggest pieces of domestic silverware. With just over a month left in the transfer window, it’s time to see whether the London pair of Chelsea and Arsenal have closed the North-South Divide.

Sir Alex faced a series of truths last May at Wembley Stadium. His team were crushed by a free flowing, skilful yet resilient Barca team. Ryan Giggs, Antonio Valencia, Michael Carrick and substitute Paul Scholes, were all out of their depth. Sir Alex’s new generation which had swept away all domestic opposition to claim a record 19th title, had been handed a painful master class. The Man Utd manager faced a summer crisis, with players ageing and the reliable Edwin van der Sarr retiring Sir Alex had to act decisively. The purchases of David De Gea, Ashley Young and Phil Jones, have given the club a new impetus and coupled with the return of Danny Welbeck and Tom Cleverly, after successful loan spells away, the United squad is bursting with the freshness that they lacked at Wembley. The Red Devils, however, have not finished spending, with £35 Million available for a creative centre midfielder; once again Sir Alex has set the standard. Buy early, buy quality and get the squad settled. His fast action has left the others in his wake.

VERDICT: 4/5 Good steady transfer progress and is once again turning to youth. Only one piece of the jigsaw missing.

Chelsea
With double winner Carlo Ancelotti fired minutes after a final day defeat to Everton, Chelsea spent the first month of the transfer window in limbo. Roman Abramovich finally appointed Andre Villas Boas who faces a major rebuilding job. The former Porto supremo must use the remaining few weeks to bring a youthfulness and vibrancy to the squad. With Chelsea’s first major signing taking place this week, the purchase of teenage goalkeeping prospect Thibaut Courtois, who incidentally looks set to join Atletico Madrid on loan, it seems as if the Blues are finally ready to make their move. If the young Portuguese manager is serious about closing the gap to United and fighting off City, Chelsea must move away from the pointless and extremely expensive pursuits of Luka Modric and Neymar, and instead address the problem of too many ageing players in key positions. Michael Essien’s knee injury is another issue for Villa Boas who so soon into his tenure is facing decisions that will make or break his Chelsea future.

Manchester City
The blue half of Manchester approach every transfer window from a position of power, however this summer they are facing a battle from within and one which they look likely to lose. Carlos Tevez, captain and talisman has set his heart on leaving. This morning Corinthians officially withdrew their offer, but it is not beyond the realms of possibility that an offer may materialise from a Spanish club, keen to take advantage of Tevez’s limited options. This undoubtedly once again leaves manager, Roberto Mancini, in a career defining situation. He must adequately replace Tevez, before City can even contemplate a challenge to United. Fellow Argentine Kun Aguero seems to be the favourite to take his compatriot’s role, however, is he the right man to fill the void? Aguero visually lacks the physical tenacity of Tevez and operates in a completely different style to his international teammate. Mancini will have to change City’s tactics and learn to utilise Aguero’s strengths.  One of Man City’s confirmed purchases this window is Gael Clichly from Arsenal, which looks to be a smart piece of business and a good alternative to flying full back Alexander Kolarov.

VERDICT: 3/5 Much will rest on Maradona’s son in-law’s shoulders. If Aguero fires from the start, catching and beating Man Utd is not unthinkable.

Arsenal
Once again Arsene Wenger is spending the summer trying to save a squad than build one. The Spanish press and Barcelona players have tried their best to make Cesc Fabregas a Barcelona player, but at this moment he remains an Arsenal player. The Samir Nasri saga was also carefully handled by Wenger and he seems to have convinced the Frenchman to give Arsenal one more season. This tactic may back fire on the Gunners though, as Nasri may walk away for nothing in June 2012. There have, however, been good signs from the Emirates, the transfer of Gervinho looks to have been a good piece of business at a good price, whilst rumours of Luis Enrique, Craig Gordon and Phil Jagielka bring hope to the Emirates faithful. We have known for a long time that two or three key signings is all that separates Arsenal form the touch of silver once again.

VERDICT: 3/5 Defender and striker. Wenger knows what he needs and the signs are that he will go for it this season.

Conclusion: The North look too strong for the South at the moment, with Arsenal seemingly better placed to challenge. Chelsea have a lot of work to do if they are to keep Roman Abramovich happy.