Arsenal will be looking to continue their tremendous form when they travel to Burnley in Saturday evening’s Premier League game.

The Gunners are on a seven-game winning streak in the league and moved up to second place with their 4-1 thrashing of Liverpool last weekend.

Former Tottenham midfield Dean Marney continues to be sidelined with a knee injury. Ross Wallace is a doubt but hasn’t featured much at all this season. Otherwise Sean Dyche has a fresh squad to choose from.

Arsène Wenger has about as few absentees as he has had all season.

Jack Wilshere, Mikel Arteta and Abou Diaby all came through the under-21s game unscathed midweek, making them available for this game.

Wojciech Szczęsny has a chance to be fit to return to the substitutes bench after missing last weekend’s victory at the Emirates.

Laurent Koscielny has a minor thigh problem but Wenger should know today whether the French centre-back is good to go or not this weekend.

Mathieu Debuchy is also back from his dislocated shoulder but he’s lacking match fitness so we don’t expect him to go this weekend, especially with both Héctor Bellerín and Calum Chambers available in his position.

That leaves only Alex Oxlade-Chamberlain out with an injury for the Gunners – the England international has at least two more weeks to go before he makes his return. 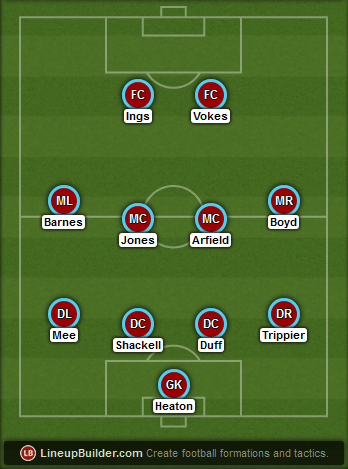 Sean Dyche plays a 4-4-2 formation and makes few changes per game. Michael Duff has been back in the centre of defence for the previous three games, keeping two clean sheets so we think he’ll keep his place there. Danny Ings is a much-wanted striker; he’s Burnley’s best hope for a goal. 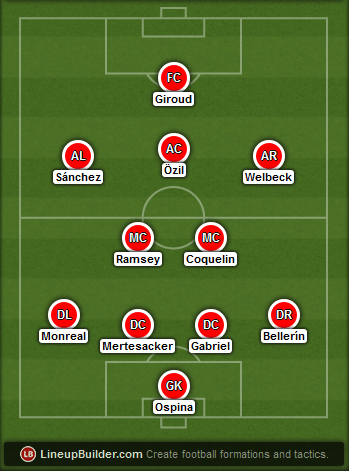 Two changes from last weekend see Gabriel Paulista come in to partner Per Mertesacker with Laurent Koscielny a doubt, and a fit again Danny Welbeck to start on the right wing with Santi Cazorla rested. Arsenal’s attack have scored 2+ goals in 10 of their last 11 Premier League games.

Olivier Giroud vs Burnley defence
Thanks to his late, great striker versus Liverpool, Olivier Giroud has now scored in his last six Premier League games. An outside bet for the Golden Boot, the French striker should be expected to beat the Burnley defence on Saturday. Michael Duff had a tough game at the Emirates earlier in the season versus the Gunners’ attack so a potential opportunity for the visitors to exploit.

Alexis Sánchez vs Kieran Trippier
Arsenal’s Chilean scored a brace at the Emirates back in November when these two first met, but he was playing the number 10 role then. Alexis Sánchez had an excellent game on the left versus Liverpool last weekend and we think Wenger will keep him there this weekend too, at least to start with.

Mesut Özil vs David Jones
Mesut Özil has found some good form of late for Arsenal and has a good matchup this weekend to continue that. Burnley are missing Dean Marney which has seen Scott Arfield move inside and they don’t have a good out-and-out protector of the back four as it is. The German should see space to rip open the midfield and back four on way to helping his side to three points.

5 – Alexis Sánchez has scored five goals in five matches versus last season’s promoted sides, including two versus Burnley at the Emirates on 1 December.

7 – Arsenal are on the joint-longest winning streak during the 2014-15 Premier League season (7 games).

20 – No team has scored more goals from set pieces than Arsenal this season.