Brazil 1-7 Germany: The most unbelievable game in World Cup history as hosts are destroyed

The most astounding game of football in all-time World Cup history saw the hosts, and original favorites to emerge as champions, humiliated and crushed by a German display of pure brilliance. The devastation started early, and even saw a stretch of 4 goals in 6 minutes by Joachim Low’s warriors, in the first half, to see them go in 5-0 ahead at the break. Brazil eventually spared themselves a small amount of their ample blushes with a consolation goal at the very death, but by this time Schurrle had pegged them back for two more.

After such closely fought contests in every quarter-final, this game came as an even bigger shock to the watching world. The game also saw Miroslav Klose get into the history books by overtaking Ronaldo, ironically a Brazilian, with the record of most goals scored at the World Cup finals.

German composure too strong for Brazil

The German’s played with staggering composure throughout the game, setting the tone early on, especially when Brazil tried to come at them after going behind by the first goal. The German defense never wavered, standing strong against Brazilian attacks, tackling confidently and passing around at the back almost with a nonchalance in the face of the hosts.

To the contrary, Brazil were completely fazed by the German self-assurance and it allowed Germany to humiliate them with 5 goals in less than 20 minutes.

The South Americans have often been undone by their defending failing to live up to the quality of their offense, but this was like a culmination of all their defensive flaws in one game. Without Neymar on the field to give them confidence and inspiration, the team was flat, but the biggest hole in the side today was left by the suspended captain, Thiago Silva.

Without the Paris Saint-German center back, The Pentacampeões were like lost sheep, no idea how to mark the Germans, how to follow their runs, or how to read the game and predict their movements.

No-one would knock any of the smaller nations for suffering in this manner to such a devastating German onslaught, but for the hosts and favorites to be mauled with apparent ease is simply not going to be accepted by the Brazilian nation. Scolari will have a lot to answer for, after his complete reliance upon just two players was hung-out-to-dry in such embarrassing fashion.

Thomas Muller opened the scoring with his 10th World Cup finals goal to take him into the top ten of all time, just behind his hero; Jurgen Klinsmann. At the tender age of 24, don’t be surprised if Muller goes on to challenge Miroslav Klose for the top spot before his career is over.

David Luiz allowed Muller to lose him much too easily, letting his marker peel off around the back of the crowd on a corner in the 11th minute and if you let the Bayern Munich man have a free shot on goal, you can expect only one outcome. The attacking midfielder watched the movement of the ball and raised a leg to side-foot it home, with David Luiz scrambling desperately to make up the ground he had very poorly allowed to be lost.

Brazil came at the Germans for the next ten minutes but with 23 minutes gone, that man Muller was again casting upset upon the home side. With the ball out on the left wing, he picked out Toni Kroos in the center and made a penetrating run through the Brazilian box, again untracked. Kroos fed it into the path of the run and he selflessly laid up Miroslav Klose for a history making moment. His first shot was blocked by Julio Cesar, but it fell back to the Lazio striker for another effort. Another piece of advice: never give Miroslav Klose two attempts on goal.

The floodgates were open now and Germany capitalized on the dropped heads of Brazil by coming straight back at them. Philipp Lahm, who has had a fantastic World Cup campaign, tore down the left wing and played a low cross through the penalty area. Muller, very uncharacteristically, missed his shot but at the far post was another completely unmarked German midfielder, Toni Kroos, who put his foot right through the ball and made it 3-0. 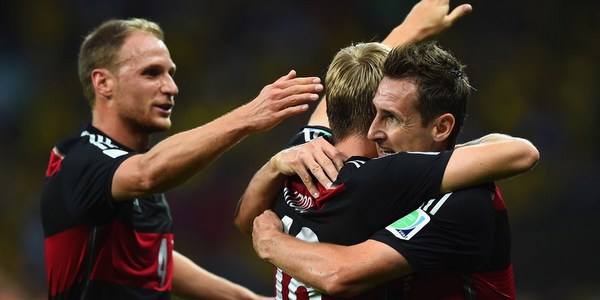 Within two more minutes Kroos bagged his brace by breaking through the crumbled Brazilian defense, playing a one-two with Khedira that threw Cesar for a loop and gave Kroos an easy tap into an open goal.

The shock didn’t stop there though and just three minutes later they completed the most devastating half of World Cup football of all time when Khedira put his name on the scoresheet. The Real Madrid midfielder had been playing brilliantly and he cut through the Brazil defense like a knife through butter, then very generously fed the ball to Ozil. The Arsenal midfielder was boxed out so he played it back to Khedira to side-foot home and now it was, phenomenally, 5-0 to Germany.

The second half saw Brazil come out with renewed enthusiasm and hit Germany hard for ten minutes but Manuel Neuer withstood the pressure with some outstanding saves. It was much too little, much too late for Brazil though, and their short spell seemed to be all they had to offer because Germany took back over control of the game around the 65th minute mark, never to really relinquish it again.

They dominated possession but Germans had taken their foot off the gas by now, with their place in the final all but a certainty. They continued to press though and substitute Andre Schurrle, who had come on for Klose (he shouldn’t really do too much running at his age!), was next on the list. Phillip Lahm again played provider, putting the ball into the box for the Chelsea man, who made no mistake with the shot in a throng of players.

Schurrle doubled his tally with a stunning goal on the 70th minute, bringing down Muller’s pass with sublime control, then slamming the ball like a rocket over Cesar. The technique was sheer class, but once again David Luiz left his marker in way too much space and practically handed the Germans the chance on goal.

Eventually Brazil found the back of the net, in the final minute, through Chelsea man, Oscar. It helped them back out of some of the worst stats in history a little but never before has a team of such stature been ripped to shreds so badly. The hosts will not get back up from this blow quickly.