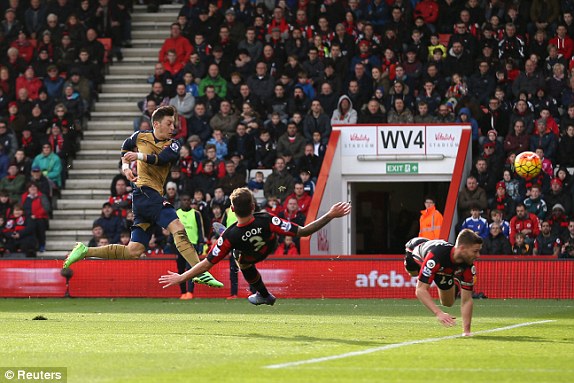 Arsenal stayed in the title race behind leaders Leicester as goals form Mezut Ozil and Alex Oxlade-Chamberlain were enough to see off Bournemouth.

The game started off a slow burner, Alexis Sanchez had the first key chance but the Chilean’s shot ended up well over the bar. The deadlock was eventually broken on the 22nd minute as Mezut Ozil’s neat finish flew past a helpless Artur Boruc to put Arsenal one up.

The Gunners doubled their lead less than a minute later as Alex Oxlade-Chamberlain scored his first goal in 18 months as the winger buried his shot from a tight angle to put his side firmly in control. Bournemouth had missed chances to get back in the game before the break with Marc Pugh and Adam Smith both finding themselves one-on-one with Petr Cech.

Bournemouth started the second half the more enthusiastic team, Smith yet again had a low effort saved by Cech. There were appeals of a penalty from Bournemouth fans as Dan Gosling’s pass inside the box struck Laurent Koscielny but would have been harsh as the shot appeared to hit his stomach. Deep into injury time and Bournemouth had their best chance of the game, Steve Cook had a powerful shot well-blocked by Cech who was back up on his feet seconds later to deny Harry Arter on the follow-up.

Artur Boruc: (6) Couldn’t do much about the goals and made a few good saves.
Adam Smith: (7) In a lot of the action and I felt played well.
Simon Francis: (5) Contained Giroud but was unable to cope with the Arsenal attack.
Steve Cook: (5) Arsenal over ran the centre-back pairing throughout.
Charlie Daniels: (7) Like Smith, did well in attack but struggled defensively.
Andrew Surman: (6) Worked hard but ran out of steam towards the end.
Matt Ritchie: (5) Wasn’t great in front of goal and was subbed off early.
Dan Gosling: (6) Got stuck in but didn’t create much.
Harry Arter: (6) Had a good effort saved but yet again wasn’t very instrumental.
Marc Pugh: (5) Looked nervous at key moments and should have scored.
Benik Afobe: (5) Didn’t do much to prove Wenger wrong as he looked out of it most the time.
Arsenal
Petr Cech: (8) Didn’t put a foot wrong and made some great saves towards the end.
Hector Bellerin: (7) Average game for Bellerin, made some important tackles.
Laurent Koscielny: (7) Did well to shut out the opposition.
Gabriel: (6) A few shaky moments but didn’t do too bad.
Nacho Monreal: (6) Was caught out ball watching a few times but did okay.
Matheiu Flamini: (6) Was lucky to stay on the pitch after a poor tackle.
Aaron Ramsey: (7) Caught dawdling a bit but controlled the game well.
Alex Oxlade-Chamberlain: (7) His goal was crucial and was menacing in attack.
Mezut Ozil: (7) Well taken goal and created space well.
Alexis Sanchez: (6) Just wasn’t his day, he will be disappointed.
Olivier Giroud: (5) His long drought continues as another poor performance saw him contribute little.
Join our Telegram channel to stay up to date on the latest in marketing