For Sporting Lisbon, holding on to William Carvalho in the summer after losing Marcos Rojo to Manchester United would come as a victory. However, the Portuguese club don’t seem to rest on their laurels as reports from media outlet A Bola have run a story this morning that the club now wants the 21 year old to sign a long term contract. The renewal would come with improved salary, performance bonus and the possible release clause (currently €45m) getting reviewed (likely increased) too. 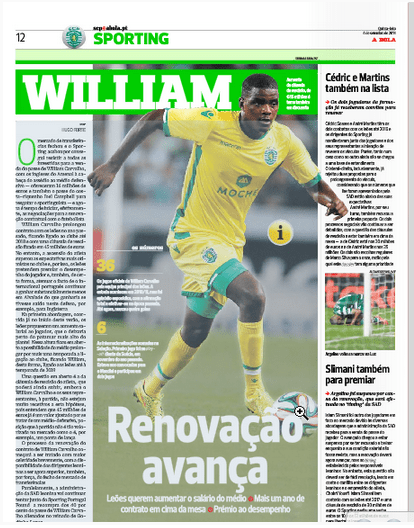 We had earlier reported that Arsenal had failed in their attempt on deadline day to sign Carvlaho despite offering €16m and Joel Campbell’s services. A Bola also have reported that Sporting wanted €30m cash and were not interested in a player plus cash offer.

Thus Sporting are taking no chances to hold on to their prized asset and are well aware that bids in the January transfer window is almost imminent. Hence, the Portuguese club want to cash for the player should he switch loyalties in the near future.