Portugal press are almost certain that Benfica winger Nico Gaitan will leave the club in the summer. The Argentine winger has enjoyed a great campaign with the Eagles, where he collected his second league title with Benfica, but he is looking for a move elsewhere next season. Rather, Benfica are actively looking to sell him in the summer.

Benfica, like other Portugal clubs, sell their prized assets at higher price to sustain their club finances. They feel the time is right to sell the 27-year-old to the highest bidder, and the club want to sort the deal out before the Copa America begins. 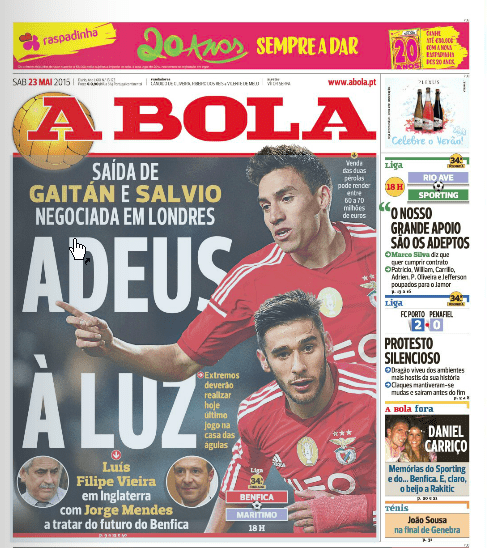 Gaitan has a reported release clause of €35m but Benfica would be willing to negotiate. The deal could be done at a much reduced price.

Chelsea are reported to be showing a keen interest in the Argentine forward, who can play in all the three position up front. A Bola reported yesterday that Manchester United and Manchester City scouts had repeatedly followed him this season.

Benfica’s president and Jorge Mendes were in London yesterday, with the future of Gaitan and Salvio being one of the main reasons. The club want to solve their future at the earliest, which means, we might see Gaitan being transferred to either of the big English clubs in the summer.