The Sunday Times reported yesterday that Liverpool are showing keen interest in Benfica midfielder Andre Gomes and manager Brendan Rodgers may even more for him in the January transfer window.

Now, Portugal media have covered this news extensively, with both O Jogo and A Bola covered a piece on it.

O Jogo claims that Gomes wants to leave Benfica due to lack of playing time while his agent Jorge Mendes is looking for interested parties. Rodgers is reportedly looking for a player of his characteristics to make up for Lucas’s absence (out with injury) and also a player with room to improve, so Liverpool might be preparing a bid for Gomes. Premier League rivals Manchester City and other Spanish clubs have also shown some interest. 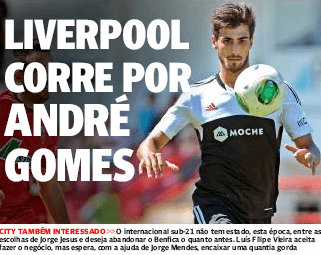 A Bola reports that Benfica have already agreed to sell the midfielder for €15m, with the player’s agent Mendes is pushing the deal through.

The sum seems too much for a player who has not played enough first-team football this year, but at the same time, he is young, a box-to-box midfielder and possess excellent technical abilities who will fit all the boxes of Liverpool’s possession oriented game.