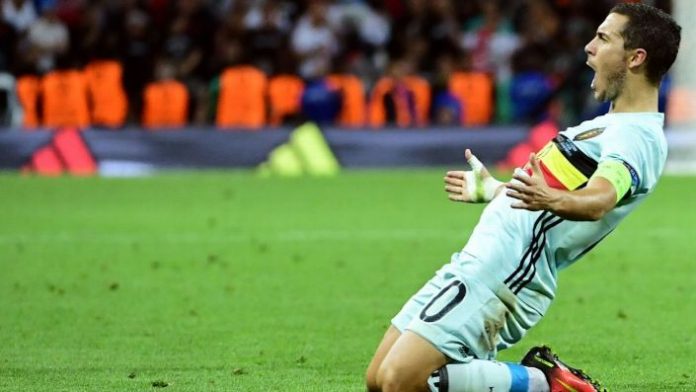 Eden Hazard scored and set up another as Belgium thrashed Hungary 4-0 in their second round match at Euro 2016 on Sunday.

Marc Wilmots’ side started the game on the front foot and could have been ahead even before Jan Vertonghen headed home Kevin De Bruyne’s free kick in the 10th minute.

Somehow the Red Devils did not double their lead before half-time, with both Romelu Lukaku and Dries Mertens not taking more than one opportunity each versus a vulnerable Hungary defence in what was a very open game.

Hungarian goalkeeper Gábor Király was forced into seven saves alone in the first half – as many as he had made in the three group stage games combined.  By full-time, their goals against tally had doubled from four to eight in the competition overall.

The underdogs started off brightly in the second half, coming close on a few occasions, though not always testing Thibaut Courtois in the Belgium goal.  Defender Roland Juhász notably dragging a shot narrowly wide whilst the Chelsea goalkeeper was forced into tipping a deflected effort from Ádám Pintér over the bar for a corner midway through the second half.

Shortly afterwards Eden Hazard took over the game.  Firstly setting up substitute Michy Batshuayi with a tap-in to make it 2-0 in the 78th minute before scoring a marvelous solo effort less than two minutes later.  This ended a run of 716 minutes without a goal in an international tournament for Hazard.

The Chelsea forward found a lot of space on the left wing as Hungary did a poor job in closing down the 2014-15 Premier League Player of the Season in a man of the match performance.  Hazard was continually and successfully taking on defenders before creating chances for teammates.  Hungary’s unwillingness to foul the 25-year-old more than twice allowed Hazard to hit his full flow in one of the individual performances of Euro 2016 so far.

Belgium’s four goals this evening makes them the tournament’s top scorers with eight in total – one more than Wales who they will meet on Friday 1 July in Lille.

A 10/10 performance from Eden Hazard overshadowed Kevin De Bruyne who also had an excellent game.  The Manchester City attacking midfielder forced two saves out of the opposition goalkeeper whilst also creating chances for teammates as well.  When Belgium play this free-flowing football they are a joy to watch.  Perhaps not for Chris Coleman’s Wales who have four days to set up a plan to keep these stars quiet in the quarter-final.