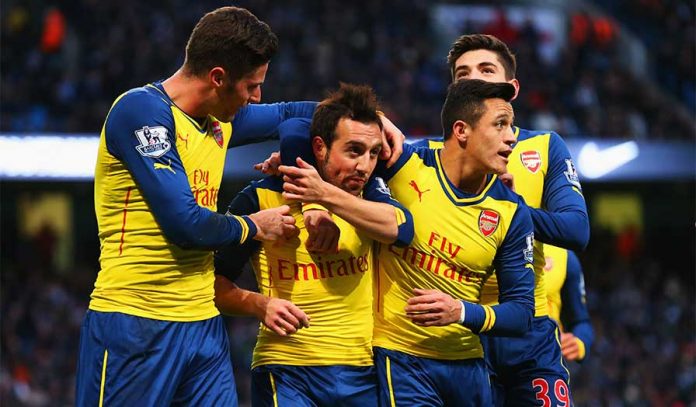 Now a working week has passed since Arsenal beat Man City, we take a look at some of the key takeaways from the game.

The past month has seen Santi Cazorla develop into the player Wenger thought he had signed when he paid 42.5 million to Real Madrid for Mesut Ozil in 2013. Everyone at Arsenal is desperate for Ozil to be a success but it would take a brave man to pick him over Cazorla based on the Spaniard’s recent form. He was Arsenal’s player of the month for December and against City the world got to see what Gunners fans have been enjoying for the past two months. Arsenal had just 35% possession in the game but thanks to Cazorla’s efficiency and composure on the ball they were rarely found out of position.

Though Cazorla was the consensus man of the match, it was Francis Coquelin who has excited Arsenal fans the most. His first two Premier League starts as a 20 year old came in the 8-2 drubbing at Old Trafford and the North London derby defeat in 2011. This is a player who Wenger has trusted in big games and on Sunday he began repaying that faith in a big way. When you set up to play on the counter away from home you can’t afford to have passengers and Coquelin epitomised Arsenal’s display, protecting his back four with hard work and sheer determination.

Coquelin has the remainder of the season to convince Wenger and the fans that the answer to their defensive midfielder prayers has been right under their noses this entire time.

Benik Afobe and Thomas Eisfeld, highly touted products of the Arsenal academy, have both been moved on this season and just over a month ago there wouldn’t have been many rumblings if Coquelin too had been deemed surplus to requirements. He’s not the saviour. He’s not the next Patrick Vieira or Gilberto Silva. He’s a young man who had a month to prove he was worthy of a new contract from one of the biggest clubs in the world. If that situation does inspire you to produce your best football you have no business calling yourself a Premier League footballer. The real work comes with showing that same drive now that his future looks to be secured.

Jamie Carragher put things into perspective on Sky’s Monday Night Football by comparing the reaction to the victory to the euphoria of winning a cup. But for Arsenal fans, most of whom are realistic enough to accept that an FA Cup repeat is their only chance of silverware, this really was a cup final.

What Arsenal fans have been craving for some time now is some evidence that their team is capable of evolving into something more than a group of talented players who do just enough to maintain their status as a “big team”. On Sunday they got just that.

While there’s no trophy for beating the champions away, when Arsenal fans make the trip to Old Trafford in May they will do so burdened, not with the fear that has plagued the build up to big away days in years gone by, but with real hope and expectation. That alone is worth it’s weight in silver.