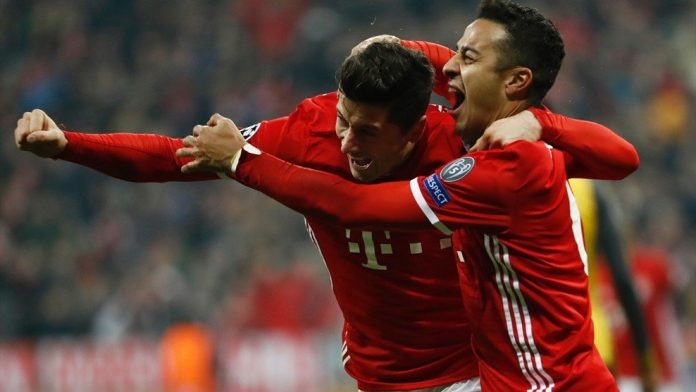 Bayern Munich have almost secured a passage to the next round after beating Arsenal 5-1 in the first leg of the Champions League Round of 16 tie on Wednesday.

It’s the same pattern recurring again – Arsenal collapsed just when they needed to toughen up. Just when you thought it couldn’t get worse for Wenger, Arsenal hit the nadir succumbing to one of their worst ever defeats in European games.

Arjen Robben put Bayern ahead with a superbly-struck 25-yard trademark left-footed thunderbolt. Arsenal responded through Alexis Sanchez, who equalised at the third attempt after his penalty was saved.

In the second half, Arsenal buckled under pressure, and lost their plot completely. Thiago Alcantara struck twice, before Robert Lewandowski and substitute Thomas Mueller added to Arsenal’s misery.

With this defeat, Arsenal have been eliminated in the first knockout round of the competition in each of the last six seasons. Naturally, it sparked an explosion of comments on Twitter, with fans and pundits tearing Arsenal apart for yet another dismal performance in Europe.

Let us check some of the reactions from Twitter:

No change there but they may now realise that I was right all along. Arsenal are soft and have been for a long time. https://t.co/4jNEY5yRZQ

Arsenal have completely disintegrated. An utter shambles and rudderless after koscielny went off.

5-1. #afc thrashed. Wenger humiliated. When will Kroenke and the board stop sleepwalking, wake up and see the problem? No leadership.

5-1. An absolute disgrace…but exactly what I predicted. #WengerOut