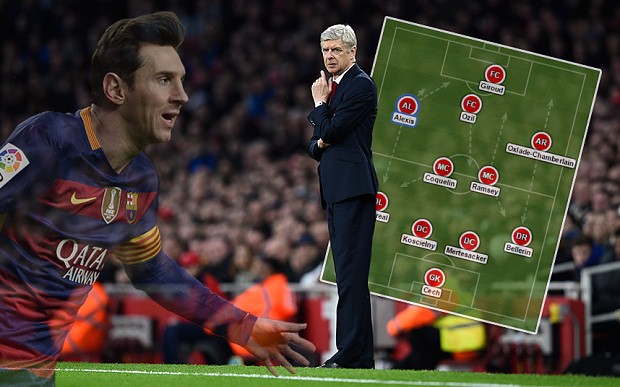 Arsenal face Barcelona in the return leg of the Champions League knockout round later tonight.

The Spanish giants won the first leg 2-0 at Emirates and will be looking to complete the job in front of their own fans at Camp Nou today.

It is highly unlikely that the Gunners will be able to overturn a 2-goal deficit against Barcelona, especially with the kind of form the Catalans are in and the injury crisis at the London club.

Arsene Wenger is set to be without some of his key players for the trip to Spain.

Arteta, Rosicky, Oxlade-Chamberlain, Ramsey, Cazorla and Wilshere are all ruled out for the Barcelona game. Star keeper Petr Cech is sidelined with an injury as well.

The only boost for Arsenal is the return of Laurent Koscielny. The French defender has been declared fit to start the game.

Barcelona will have a full fit squad to choose from. Gerard Pique is the only player ruled out of the game with a suspension. Former Arsenal defender Vermaelen could feature against his old club tonight.