Juan Cuadrado knows very well the time has come for him to test his potential at better leagues with top European clubs.

Fiorentina knows that as well. And when the two clubs vying for Cuadrado’s signatures are Manchester United and Barcelona, the price tag is bound to inflate. In this case it is around €50m going by the reports.

Cuadrado impressed during the World Cup in Brazil and is primarily seen (by Catalan press) as a natural replacement of veteran Dani Alves.

Catalan press firmly believe that Manchester United have offered him a better contract and incentives to his agent that leaves the Old Trafford giants in driving seat. 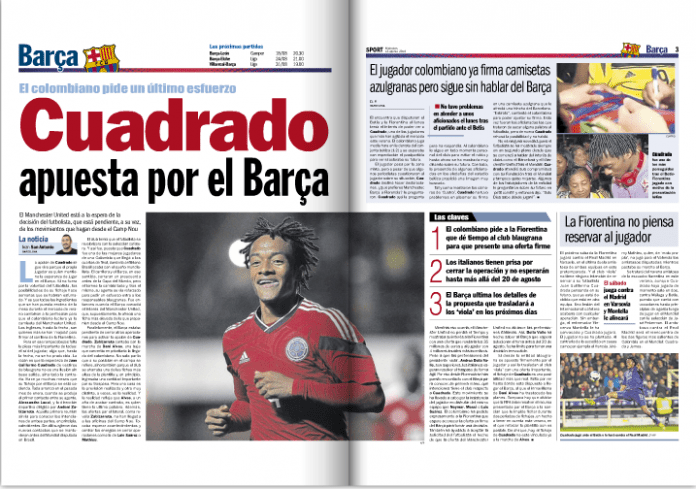 Sport, a catalan based newspaper, however claim that Barcelona are not completely out of the picture as yet. Rather, Barca’s chances of landing him are still there as long as the Colombian himself favours a move to Nou Camp.

The newspaper claim, Cuadrado has asked Fiorentina to give Barcelona the necessary time to make a concrete offer.

The Serie A giants know that they need to find proper replacements, should he be sold. The Viola are in a hurry to finish the operation and won’t wait longer than August 20, that is next week.

Barcelona are preparing a lucrative offer for him, thought to be around €35m upfront plus €4m in variables. Cuadrado has signed few Barca shirts for fans and Fiorentina are not thinking of using him in their future friendlies until he’s sold.