The Australian group is definitely not an easy group. Upon first look, many people instantly jumped to the conclusion that Australia had been placed into the venerable group of death. This is not the case.

This time around however, Australia does not have the tag of underdog, and opposition teams will be doing their homework this time around. Speaking about the group draw, Jurgen Klinsmann states that he’s “interested to see how far Australia’s fighting spirit takes them. They could have beaten the Italians back in 2006”. The famed Kangaroo fighting spirit is one that could take Australia even further than 2006. 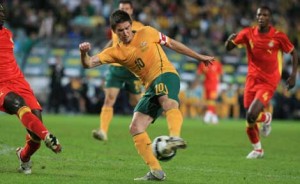 Australia’s history against our group opponents sways in our direction, with good records against two out of three of the sides. Australia has never played Serbia before, seeing as this is their first World Cup as a separate nation.  Australia’s record against Ghana pushes in our favour, most recently a match at the SFS ending in a small 1-0 win to the Socceroos.

The Germans, easily the favourites to progress from the group will be the toughest team, however the Socceroos gave the Germans a run for their money at the Confederations Cup in 2005 and as an added bonus, was on German soil. As Michael Cockeril stated in his analysis for the Fairfax Newspapers , that the possibility of playing England in the Round of 16, is a good incentive for the players.

Some of the key players for Australia at this World Cup featured prominently at the last World Cup. Mark Schwarzer will once again start between the sticks and the Fulham man has been touted one of the best goalkeepers in the Premier League. Tim Cahill will be a key factor for the Socceroos, and will hopefully be up there doing what he does best, being there and scoring at the right place, and the right time.

Harry Kewell has been great for Galatasaray this season, and hopefully he can carry this round to South Africa next year. Notable mentions Lucas Neil and Scott McDonald have been playing at the highest level for a long time, and their experience can bring in the rewards.