Aston Villa assistant/caretaker manager Gary McAllister has been boosted by a return to fitness for Richard Dunne, who hobbled out of last week’s defeat to West Brom, and Emile Heskey who missed the game with a knee injury having started the previous two.

The home side for Saturday’s clash will however, be without midfielder Jean Makoun who is still suffering from a dead leg, although the Cameroon international had been dropped from the side since a return to form for club captain Stiliyan Petrov.

McAllister did little to impress Villa fans with some pretty nonsensical substitutions last time out, leading to a defeat to Hodgson’s Albion, and in turn, every other Midlands rival in the league and cup this season.

Wigan have been left sweating on the fitness of both Mohamed Diame, who picked up a groin injury last time out, and star man Charles N’Zogbia who clashed with former Latic Leighton Baines in the 1-1 draw with Everton. Both are doubtful and will face late fitness tests.

Despite Villa’s as yet, insecure position in the league, there is no doubt that Wigan need the points more than the home side on Saturday as they sit 18th in the league with Villa 13th. With a win Martinez’s men can move to within 3 points of their opponents and potentially take a big step to securing their own Premier League status next year as it looks like it will be 3 of the bottom 4 facing the drop.

Roberto Martinez will be hoping that his sides league record at Villa Park can continue having gone undefeated in their last 4 trips to Birmingham, winning 2 (both 0-2) and drawing 2. Villa have failed to score in the last three of those encounters and when it comes to facing Wigan, and also prefer their away days in the fixture having won their last 3 at the DW Stadium including the 1-2 victory earlier in the season.

Soccerlens Prediction: Villa’s season is coasting to a stop while Wigan are still fighting the drop. A draw seems most likely, and the point will be a vital one for Wigan to escape relegation. You can use this free £25 bet on a 1-1 draw, which also enters you in a contest to win £100 for free. 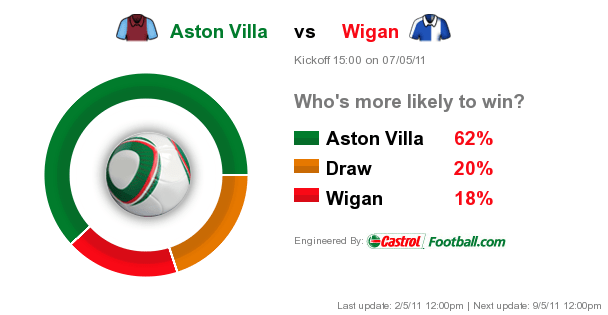