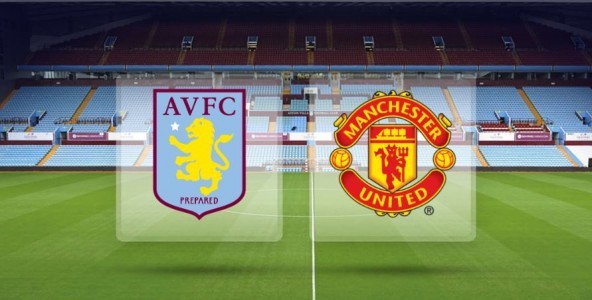 Manchester United will travel to Villa Park to face Aston Villa on Sunday afternoon, looking to get their title defence back on track.

The task is easier said than done. The Red Devils are 9th in the Premier League, 13 points behind Arsenal and further slip-ups from here on, would end not only their slim hopes of mounting a late challenge for the title, but would leave serious doubts about their possibility of getting into top four as well.

Statically they should get a positive result against Aston Villa at Villa Park. They are undefeated in last 18 away matches against the Villans – the last Premier League defeat at Villa Park came on the opening day of the 1995-96 season.

Then again, prior to this season, West Brom hadn’t picked up a victory at Old Trafford since 1978, Everton’s draught dated back to 1993 and Newcastle’s misery continued since 1972.

The Red Devils however returned back to winning ways after successive 1-0 defeats in the league against Everton and Newcastle, with a 1-0 win over Shakhtar Donetsk on Tuesday that ensured they progressed to the last 16 of the Champions League as group winners, but the performance can hardly be called convincing.

Villa’s five-game unbeaten run ended with 2-0 defeat away to Fulham last week that left them sitting 11th in the Premier League. Paul Lambert has won more away matches than home games, while their biggest problem this season is lack of goals upfront. They have failed to score in six of their last nine league fixtures; Christian Benteke has now gone 10 hours and 40 minutes without scoring a Premier League goal and he is still the top scorer at the club with 4 goals – that sums up Villa’s problem in a nutshell.

Villa’s star performer Fabian Delph is suspended for this tie having picked up his fifth booking of the season. Antonio Luna, Ron Vlaar Libor Kozak all missed out last weekend and remains doubtful ahead of the visit of United.

Wayne Rooney returns from suspension and will lead the line but Robin van Persie faces a month on the sidelines with a thigh injury.

Marouane Fellaini and Michael Carrick have back and Achilles injuries respectively and are unavailable, while Evra, Vidic and Smalling are are doubtful but well be incontention to take their places in the match-day squad.

Prediction: 1-3; Man Utd are undefeated in 17 of their last 19 away matches in the Premier League and fancy them to win this tie on Sunday.